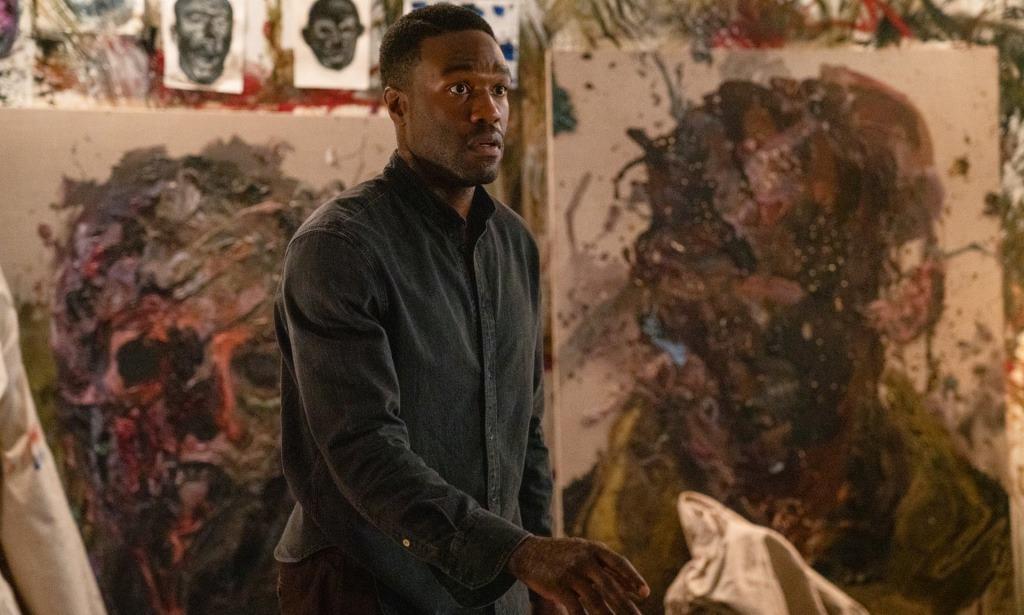 With release timings changed in April 2020 to 25 September 2020 (due to Covid-19), Candyman is now further delayed for theatrical release with 16 October 2020 as the new date.
Watch a second, animated, trailer released by the director here,
and a new trailer released 29 June 2020 here.

Jonathan Glickman (MGM Studios): "We cannot wait for the world to see what the mind-blowing combination of Jordan, Win, and Nia bring to the legend of Candyman. They have created a story that will not only pay reverence to Clive Barker's haunting and brilliant source material, but is also thoroughly modern and will bring in a whole new generation of fans."

Jordan Peele: "The original was a landmark film for black representation in the horror genre. Alongside 'Night of the Living Dead,' 'Candyman' was a major inspiration for me as a filmmaker - and to have a bold new talent like Nia at the helm of this project is truly exciting. We are honored to bring the next chapter in the 'Candyman' canon to life and eager to provide new audiences with an entry point to Clive Barker's legend."

Nia DaCosta: "I think something that we [DaCosta and Jordan Peele] connect on a lot was the way we view horror, and our love of horror. I love Candyman, but also just like breaking down what horror is, how it's represented, what it means, and why it's important. I think we really connected on that, and so that's a lot of what our conversations have been about... that I can tell you (laughs). It's been great. He's a wonderful creator, collaborator, human, artist."

Nia DaCosta: "I always loved horror when I was younger, I just loved all creepy films. Candyman was one of those movies that scared the shit out of me. I remember it aligning so well with me being in middle school, although it came out a few years before I was in middle school. In the bathroom, people would either say 'Bloody Mary' or 'Candyman.' Today, I understand that it's special because it has a black antagonist in a very white space, which is problematic, but at the time I was like, 'Oh cool, we have black dudes, it’s terrifying. Virginia Madsen, and what, bees? Honey? What's happening?' It was very much of that."

Meet Nia DaCosta, the Director of a Western With Big, Emotional Yee-Haw Energy

Nia DaCosta: "I can't say what's happening in the film because we want it to be a surprise, but [Yahya Abdul-Mateen II]'s not replacing Tony Todd. That's been reported, and I was just like, 'I don’t know what to say about this. This is not right.'
"Coming into this situation, where I have my taste and that’s why I was hired, knowing that is what gives me confidence. And being supported by someone like Jordan, who is obviously brilliant, amazing and wonderful, and not just as a creator and filmmaker, but as a person and collaborator, gives me confidence. I’m surrounded by people who trust me, as well, and who are brilliant, and I know that, if I get something a little wrong, the support is there. What’s on the outside and on the inside is what leads to it being possible...
"Oh, man, I love [Clive Barker]'s work a lot, from Abarat to everything else. There’s so much specificity and dark whimsy in his work. Dark whimsy is not the right word, but there’s so much reality and truth in it, at the same time. Being able to take genre and expansive worlds and expansive people, and doing that as well as he’s done it, is a big thing. Also, there’s the weirdness of it that I think is really special, and how specific that weirdness is. That’s what I want to draw into our Candyman."

Ian Cooper (Creative Director Monkeypaw Productions) : "We talk a lot about fans and the idea of appeasing fans and when you do that and how do you do that and when do you not do that...
"I think what we’re trying to do with Candyman is both be mischievous in how we address the relationship to the first film but also be very satisfying... In a broad sense of the word, this film will stand alone if you’ve never heard of a film called Candyman and will dovetail in a pretty complicated and interesting way to the original. In short, I think this will really fit in with what we’re doing with Us and did with Get Out in a way that will be circuitous."

Bridget Harvey (Twitter Next): re. the Twitter campaign for Candyman's trailer: "We are thrilled to partner with Universal Pictures to usher in a revival of this iconic film with a custom campaign that you can only find on Twitter. People love talking about horror movies. This is an inventive form of storytelling that immerses fans and rewards them with a first look at this highly anticipated sequel."

What Did Twitter Users Summon By Including #Candyman 5 Times in Tweets?

Justin Pertschuk (Universal Pictures): "We wanted to bring Candyman, and this terrifying legend, back to audiences with a creative campaign that would really get people talking. With Twitter, we designed this first-of-its-kind activation that threads a critical element of the plot through our promotion of the film."

What Did Twitter Users Summon by Including #Candyman 5 Times in Tweets?

Nia DaCosta: "Gentrification is what helped us reimagine the story because Cabrini-Green is gone. The movie from the '90s has a vision of Cabrini-Green where it's sort of on its way to being knocked down, so going back there and seeing what's happened around that area...
"What we do in our film is talk about the ghosts that are left behind... What we were able to do because 30 years has passed, and because there has been so much change in the neighborhood... was dig into the themes that were already there.... We want to do what the original film did; be audacious, be fun, but also be meaningful."

Jordan Peele: "[Candyman] was one of the few movies that explored any aspect of the black experience in the horror genre in the '90s when I was growing up in that moment. And so it was a perfect example, an iconic example to me of representation in this genre, and a movie that inspired me... [Nia DaCosta is] uniquely suited to direct this film."

Yahya Abdul-Mateen II: "He was a mythical figure in my household. I knew there was a movie, but Candyman was always real. It took on a life of its own. It was one of those things, like the Bloody Mary game, that you didn't play with. You didn't play with Candyman."

Yahya Abdul-Mateen II: "He lived in my imagination, in the retelling of Candyman, in the way that my older siblings talked about him. I grew up with Candyman not being a figure from television or movies, but with the possibility of him being a real threat within the house. The dread of Candyman was palpable. We'd go into the bathroom and play the game in the mirror..."

Jordan Peele: "I think the reason I love the original Candyman is, for better or worse, it broke us out of a box. A Black monster was pretty revolutionary. If there was no Candyman, I don't know that there would be a Get Out.
"How do I tell a story with a Black villain in a world that has exhausted the villainisation of Black people? And yet, this is a piece of representation I crave as a horror fan."

Nia DaCosta: "I read the first draft and thought, 'How do I push this further?'
"There is definitely a sense of taking ownership, and telling a Black story about Black people. It was very important for all of us to have our main character be Black, and for this experience to be through the Black lens. Let's make sure we change the lens now."

Nia DaCosta: "A big difference is the neighbourhood has changed so much. Candyman is a perennial figure; he's always stalking the same place, but we've only come to that place when it was Cabrini Green and we've never seen anything before it or after it. And now that we're there, we're getting something completely different. It gives us the chance to inject a contemporary point of view into the whole thing. I think 2020 just ended up being the right year because there's enough change to talk about now...
"When you start looking at a [reimagining] like this, you think the first thing you're going to want to do is go back to the place [of the first film] but that place doesn't exist, and why doesn't it exist? And when you go into the reasons why Cabrini Green didn't work as a housing project, the reasons why the people who used to live there were scattered around Chicago, why those buildings were torn down - when you look into all those systemic issues, you come out with more themes that are actually as similar to the first movie as they are to a modern Jordan Peele film. So it all kind of flowed from there, from asking really important questions about who we are and how we got here, and then layering on this wonderful fantasy of Candyman."

Boogeyman In The Mirror

Yahya Abdul-Mateen II: "I think we have an opportunity to continue the conversation. I think that anytime that we're telling a story that's important to African-American culture and history, then we're making entertainment to pack the theatres and to tell that story, and if we do that in a powerful way, where audiences resonate with it, then I think it will. I think if we tell a story that will inspire people to go out and have conversations, and to go out and tell their own stories, and to add to the stories that we've created, then I think we will be doing our part and moving that history forward in a positive direction."

Nia DaCosta: "Candyman, at the intersection of white violence and black pain, is about unwilling martyrs. The people they were, the symbols we turn them into, the monsters we are told they must have been."

Nia DaCosta: [re animated trailer] "The beautiful shadow puppetry was done by @ManualCinema and the haunting score was created by @lichensarealive. There'll be much more where that came from in the film."

Yahya Abdul-Mateen II: "[Us was] one of the most supportive sets I’ve been on and the morale rose through the roof. On that job [Jordan Peele] told me, ‘You’re really good, so you’re going to have a lot of choices.’ He said, ‘Make sure you only do what you love.’ And he also said that he wanted to give me my first lead in a movie, which has ended up happening with Candyman.
"The way I see it, Candyman was born out of the original Candyman, Daniel Robitaille, who was born out of an act of white violence. He was a black painter who, because of his relationship with a white woman, was essentially lynched. And the repercussions of that action lived on for ages and ages.
"The movie shows the repercussions and ghosts that live on from those actions and takes it a step further to talk about systemic violence and how all those actions create stories. Stories create legends, which have implications and repercussions..."

The Vision And Values Of Yahya Abdul-Mateen II 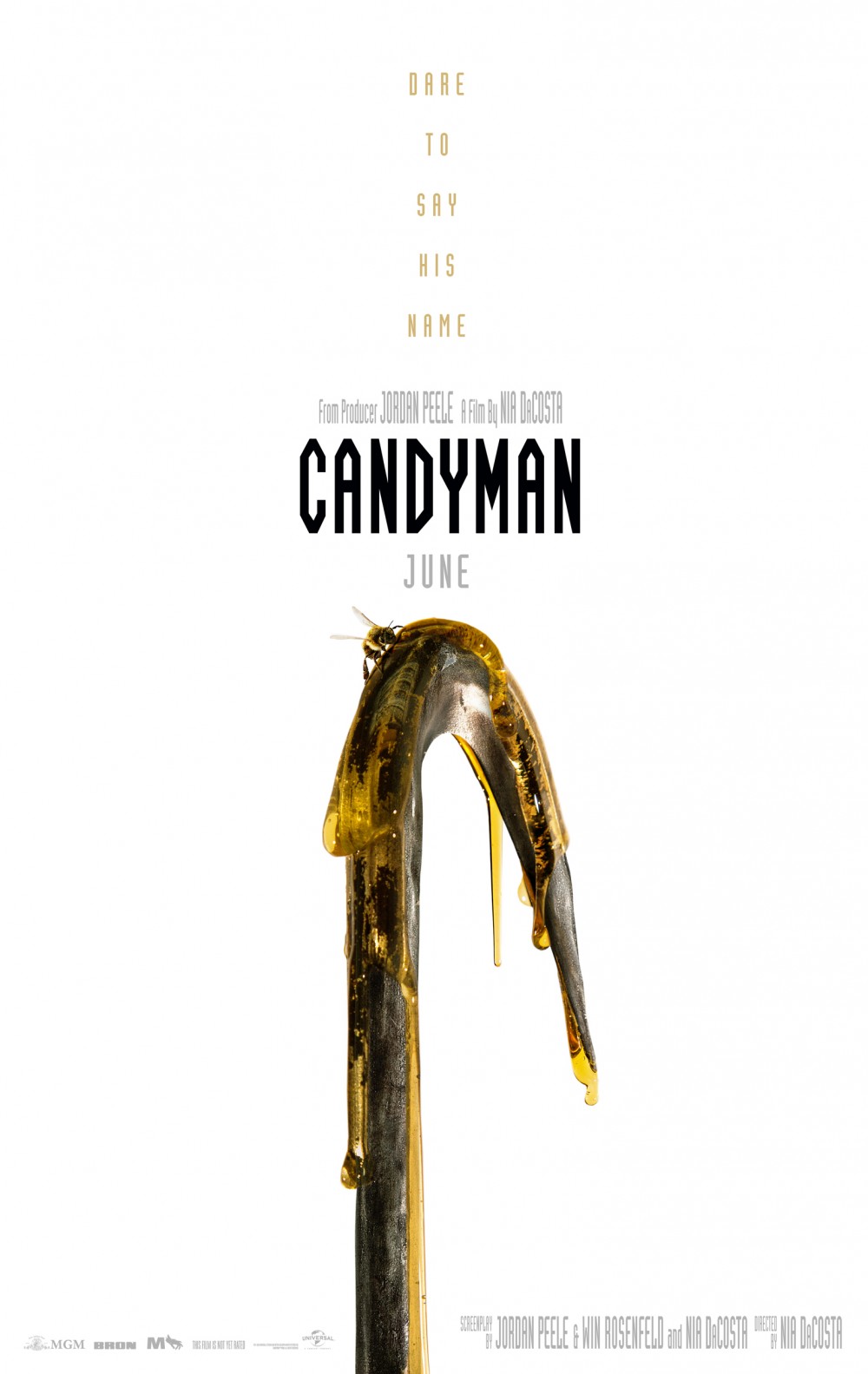