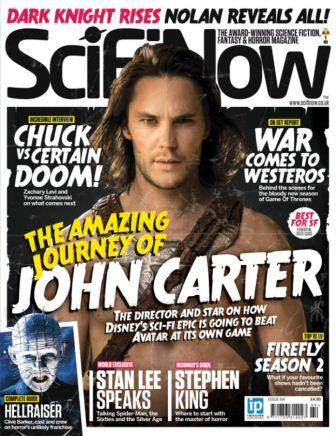 The Complete Guide To Hellraiser

By Calum Waddell, SciFiNow, No 64, March 2012 (note: this is a completely rewritten article using interview quotes from a 2009 interview that were previously published in SFX, May 2010)

"I got paid $21,000 to write and direct Hellraiser. Part of you thinks, 'Boy, and they got to own the movie rights to Pinhead forever? That was a sucker's deal.' But on the other hand you have to think, 'Well, somebody agreed to let me make it and if that hadn't happened, perhaps we wouldn't be having this conversation.' So I don't have any regrets because I got to do a horror classic that, I think, people will still be watching for many years to come..."

"I had a 4 o'clock appointment with the dentist. It was exploratory, to see what they wanted to do. It wasn't anything. There was a little bit of bleeding, there was some blood so obviously they pierced something. I got home, I didn't feel great, a bit woozy, then I have no memory of anything... I have no memory of anything until twelve days later fighting to pull the tubes out of my throat. I had three tubes down into my lungs, to inflate them and keep them going, because my system had completely turned off.
"Now the doctor was saying to me, 'This is the third time you've done this - if you do it a fourth time you'll die.' And I was terrified - I didn't know who these people were - they wore masks, it felt like I was being tortured. I kept trying to ask, 'Why?' but couldn't because of the tubes in my throat... It was horrible, let me tell you, it was horrible. There was nothing about it that was revealing or insightful or pleasant. It was a nightmare...
"When I left the hospital, three separate doctors who'd worked on me said, 'You should not be here. There's no way somebody who's as ill as you were when you came to us - you'd already had three seizures in the ambulance on the way down to Cedars-Sinai,' which you know is only five minutes' drive. I don't remember any of this - I was unconscious, but I had three seizures, each one of which should have killed me and they had no expectation of me coming out again alive and my poor friends, you know, my loved ones in the house, God bless them, they were sitting by my bed trying to bring me round by talking to me for eight hours at a time. I remember nothing - well, I have some snatches of things that are too horrible to talk about, that I don't want to talk about - maybe I will one day, but not now..."

"I think we are at a place now where we've earned the right to say what we want to say but we haven't got the imaginative oomph that it takes to get from an idea to a vision and a vision into something metaphysical and until we get that we are always going to be second class; we are always going to be lost, a little bit. And I don't want to be lost, I think I got found. I think I was found by... William Blake... and the power Blake has to transform your life."

"Why Do You Choose Any Story To Tell? Because It Excites You"

"In the process of writing something, you get better at it, and if you don't then you're very dumb indeed. If you don't learn the lessons from your mistakes then you deserve to keep making them over and over again. But if you do learn the lessons then you stand at the other end of the process and look back on it and go, 'oh, but I learned this and wow.' I will not look back on a manuscript until the whole thing is done. And I know a lot of people will think that's utterly crazy. The fact is that if I did look back, my heart would sink and a thousand doubts would devour me and I would be probably unable to continue, actually. I dare not look back at the failure behind me for fear that it will also be in front of me." 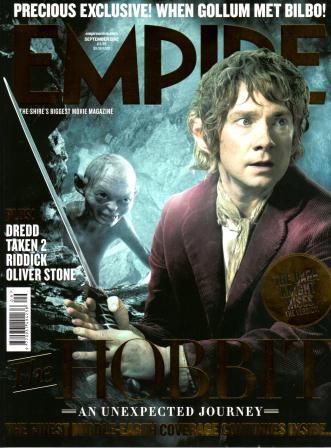 "The movie [Nightbreed] failed so dismally and the reception was so vicious, I was just dragged down by the waste of it. If I've come across as distancing myself from it, it's because I felt that I had not succeeded. I felt I'd let everybody down, including myself. There were a lot of people who'd really given their love and pushed harder than they needed to on my behalf, and we had nothing to show for it. The studio wouldn't even pay for the real actors to dub it; they wouldn't pay for Doug to come over to LA to do his voice. I felt terrible about that. I'd known Doug since I was 15! There was a sense I was losing my team. So you begin to see why I felt so bad about it...
"What we're looking at is a monstrous jigsaw, but the fact we've been able to reassemble the pieces in the right order now testifies to the fact that my version was actually shot. After all this time, I'm suddenly very optimistic!"

"I am incredibly excited about the Odyssey project. DeviantART is a place where artists can thrive and embark upon that which has been my life's work; the creation of worlds. Now, I eagerly look forward to the experience of creating a new world, together, with the deviantART community. The possibilities are endless. The potential, vast. I am enthralled by where this journey will take us." 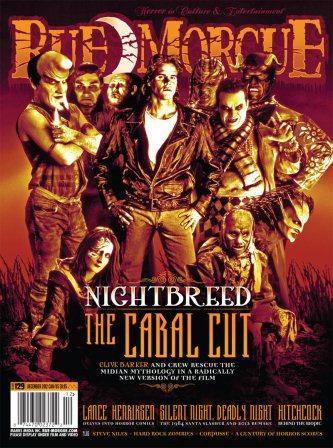 "I thought that the underlying philosophies in the story were not ones that Americans particularly liked. I've been told many times that I am obsessed with death. I'm not actually. Yes, there is a lot of death in the movies, but it's not violent death, glorified death in the Godfather sense. There are atmospheres of death that hang over all of my films. The feeling of dread. The anticipation of something horrible. I don't think a lot of audiences like that kind of thing.
"I'm just not an action director. I'm a tonal director that focuses on evil and its motivations. I don't think that's what horror audiences liked at the time. But they've come around in Nightbreed's case because of, I think, something in the culture, which has pointed out that monsters can teach us a lot."

"I want to be useful as a teacher. I want to be able to communicate, and pass along the lessons that I learned in my years as a writer and a painter, filmmaker, playwright. I feel

Live Facebook Q&A session, 15 December 2012blessed from emerging from my coma in February to have regained a new clarity. A new sense of usefulness. Unfortunately at present my body is taking longer to mend itself than my head. And it will be many many months before I can resume any form of public life. But when I can one of my first priorities is to teach...
"I'm most proud of passages from Sacrament. And from The Thief of Always. I loved writing about Will Rabjohns's journey into himself in order to re-enter the world. Because it felt a journey I was taking. And Thief allowed me to say some very simple things about what I love and value in the world - and communicated to the children who will be tomorrow's law givers, and teachers, and artists, and parents. We as artists have a huge responsibility to tell our own truth with the greatest honesty and fearlessness. If we hide some part of ourselves because we are ashamed for some reason, then we censor our own lives, which seems to me a great tragedy. I want to be able to be myself in a very unwashed way. That's why I put the photos of myself naked, to just say, 'Here I am, for better or worse...'
"If I had to be judged by a single work then I would say that work be Imajica, but in truth I want to be accepted as a chaotic, contradictory and passionate imaginer in every medium I play in. So again in the ideal world, [I'd] best like to be seen in my totality from my weakest moments to my strongest, from my most confused visions to my clearest, it's all part of me. The poems I wrote with clear eyes are no less valuable then the ones I wrote with tears. The prose I wrote in white heat scarcely aware of the words being put on the page are no more important than the calmly reasoned sentences which I formulate in other places. In other words, to quote Walt Whitman, 'Do I contradict myself? Yes. So I contradict myself - I am vast, I contain multitudes.' Of course Whitman was a pretentious fellow, and I would [never] be caught saying something like that."