"Lena Headey is a marvelous performer with an incredible presence. As far as I'm concerned, there is no better choice of actress for the role of Jacqueline. Her beauty and authority will carry the day."

"Jovanka Vuckovic's vision for Jacqueline Ess is at once devastating and beautiful. Let there be no question: this is the film she was born to make."

"Never before have I seen anything like this [Motion Books platform]. Madefire has created a radical way in which to read comics and I'm excited beyond words to be a part of the revolution."

"I always knew it was going to be a massive narrative and I had to have an idea that belonged there; that had earned its place to be the third book of The Art and to my mind that meant dealing with the Western mystical traditions somehow or other - because I think that was always implicit in the first two books - you know? The Dead Letter Office was leading us to a sense of what those mystical traditions were and how it all pulled together and so this is really about the greatest evils of the last century or so against the greatest good of the last two thousand years and how we are somehow or other, for better or worse, in a place that positions us between those two things with our shoelaces tied together - in other words, in a dangerous place, not sure of our equilibrium as a species, not sure I think even if we belong alive."

Hellraiser Creator Reflects On Decades Worth Of Influential Visual Art

"There is definitely a through line: the through line is The Figure. I draw human beings, or that is to say, variations on the human being - mutations, transformations, abstractions - pretty consistently. In fact, it's arguably the only thing that I'm really interested in.
"[My art can look] like inventions that are more concerned with taking a line for a walk... This is Picasso's idea and not mine, but the artist was instantly freed from the necessity of likeness when the camera was invented. I have no respect for, or need to be respectful of, reality. Reality is taken care of by photography. I can now look internally into my imagination and what that has to say about the world. My lines can investigate entirely different kinds of journeys. And my curiosity is more about where a line might go more than what it will look like when I get there." 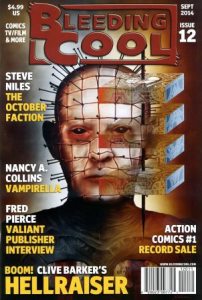 "Comic books are the perfect mixture of words and visuals, and I have always attempted to paint pictures with my words and tell stories with my paintings. I would never have understood the symbiotic nature of words and pictures had I not seen the seamless blending of the two in comic books."

"What the end of this movie [Nightbreed] always signified was that Ashberry was to go out into the world and find these creatures and Boone was to save Baphomet, to save the Nightbreed and empower the Nightbreed. But you know it was never going to happen because there was never any support for this movie. 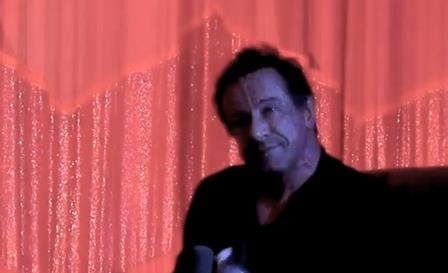 Nightbreed Screening, Crest Westwood, 27 October 2014 "I know that there's stories in my heart about these characters and I know that there's a story yet to tell, an epic story yet to tell about these characters but I don't hold my breath because I've been disappointed a lot... I think we need to be content with the things we've been given... I've been given this and I think it would be mean-spirited of us, almost, were we to say, 'What else can I have?'"

"What we have done with The Books of Blood is, I assure you, nothing short of astonishing. Prepare yourselves for an experience the likes of which you've never seen."

"I can make a very clear distinction in my head between what is fantasy and what isn't. Otherwise I think you'd go nuts, you know? I mean you've got to keep everything in place, haven't you..? I would go nuts if I couldn't distinguish, clearly, between, 'Oh, well this is fantasy, this is reality...'
"I remember lying in this bed and a whole bunch of things coming together in really one of the very few nightmares I've ever had. I've had so few nightmares in my life - or things that I would define as nightmares. This was as bad as it gets, for me, anyway. And if I'm being coy about saying what it was it's because it's going to be a book and I don't want to spoil the contents, because some of it was very personal; it was about - this part I can tell you - I dreamed I was dead in bed, here. And I dreamed that outside were a large gang of my followers and my friends and my fans and my family had assembled, knowing that I was dead. And that I actually got up from the bed, walked through everybody who was in the room - because I knew about half a dozen people in the room at that time, right? And I walked out of the house, unnoticed, through everybody, and out into the street and it was very, very windy; it was the evening; it was very windy and cold - which it was at the time, right? It was March or whatever. And I had seen a movie which Mark had lent to me, called Education for Death, which is [a short anti-Nazi propaganda film] and it's terrifying. But along the way a number of the Third Reich high command turn into various animals - they turn into pigs, they turn into goats. It's quite like the Night on Bald Mountain sequence from Fantasia - do you remember that sequence, where the Devil gathers all these things up from Hell and they dance on his hands? That's exactly the same imagery. It's interesting because it's made at the same time - 1941, right? And they were carrying carts full of corpses, these pulling carts - I cannot emphasise how strong this imagery is. This will make more sense when you see it. The colour-values and everything is just so incredibly dark and grim. So I take that imagery, I go outside into the street and what I find is there's a factionalising going on outside, there's a battle going on between my people, my mourners, my celebrants and the forces of evil who are culled from the movie. And it was horrible. And when I woke up I could still see some elements - I could still see vultures in this room. So I was still having, that part of it carried over into reality and I was lying here, basically hallucinating."

Clive Barker On Nightbreed: 'Where there are monsters, I feel home'

"I was always aware of the ticking clock of time, always. I was very aware that I had a lot to do and I wanted to do those things in the best possible way that I could and probably the biggest way I possibly could. I've got a few things coming down the pike which are probably bigger than anything I've attempted so far. They're pretty radical pieces of metaphysics even by my own standards. There's a lot of really tired storytelling out there - a lot of sequels to sequels to sequels. I want to be able to still surprise myself, even shock myself, whether it be sexual content, whether it be about the theological content, whatever. I want to be able to knock myself sideways. Otherwise, what a waste of a life that would be."

Return Of The Dark Master

"Writing is fucking hard, and very seldom is it pleasurable...
"I'm a very self-critical son of a bitch. I work fast, I think, and that allows me to throw out a lot of things. If I don't let things go, they sort of constipate the whole process and then I can't move forward, so it really is important to me to not get overly besotted with one particular idea, but to instead simply move on to another one and let that happen."

Clive Barker Is Back From The Dead

"You've seen Hellboy 2. There's a sequence in the middle where for 15 minutes they go into this lusciously rich world of very strange creatures and it is entering Midian. It's the same beat as appears in Nightbreed. Neither of us are stealing; we are just both monster-lovers. I was looking at Fellini's Satyricon - there are a lot of things in it which obviously I was influenced by, and there are scenes which have the same sense of fantastical reality. What I'm saying is, we all as imaginative filmmakers are each influenced by the generation which comes before us and hopefully then influence the generation which comes after." 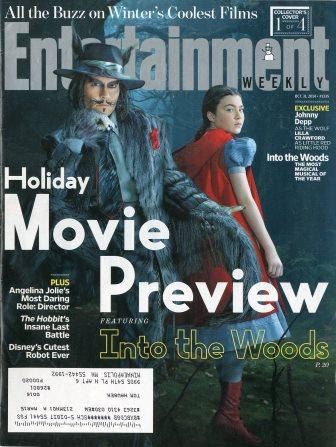 Nightbreed Rises From The Dead

By Clark Collis, Entertainment Weekly, 31 October 2014 (note - edited from the longer online version at ew.com above)

[Re the day after Nightbreed's 1990 release] "It was the first time I ever contemplated putting an end to my life. I'm exaggerating - I would never have done that - but it felt like it was a total fucking waste of my time."