From Hell And Back 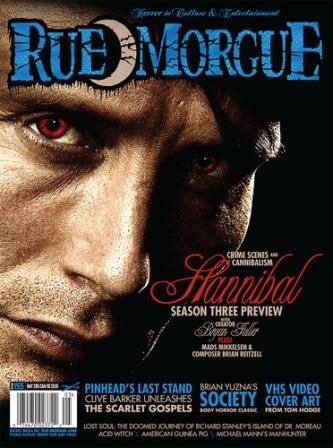 Rue Morgue, No 155, May 2015 "I wanted this bastard [Pinhead] to go out with an undignified end, and I mean that - I did not want him to be given some clever, rhetorical ending. I wanted him to get the end that he deserves. He's a villain, let's not forget this. I've heard some people say, 'Oh, he's doing some really nasty things in this book. Why does he have to do such nasty things?' He's a bad guy, for fuck's sake! He does bad things because he's a bad sonofabitch and now he's going to get his comeuppance...
"I always thought Pinhead and D'Amour were sort of yin and yang. The two characters belonged together in that way. Lest we forget, D'Amour is not exactly helpless or without his own dark elements. Some of them come into the book, but there is a lot I'd still like to write about." 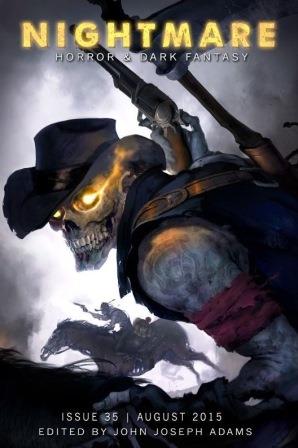 Nightmare Magazine, No 35, August 2015 "I'd like to think the book [The Scarlet Gospels] is completely self-contained... I did take away a lot of material from the first and second drafts because I felt it wandered a little bit - I hope now it doesn't wander; I want it to be raw and clean and aggressive.
"Almost all the fans have never expected me to go back to Pinhead in literary form. The expectation was that I would go back to him in a movie. That never felt right to me... that wasn't really what I really wanted to do - what I really wanted to do was get there with words. And you know, Pinhead is a rather literary figure; he speaks with a certain cadence, a certain almost Shakespearian cadence. He speaks with these round tones and Doug does a really good job with that stuff. So I wanted to make sure that was in the performance, if you will, of this farewell and I couldn't do that on a movie screen."

"It's really hard for me to get a sense of what is and isn't disgusting. I've been working at this job of disgusting people for a long time, and it's difficult for me to get a sense of taste, or distaste, where the material is concerned. A scene actually made you put down the book? Hey, I feel that's a bit of a triumph! I'm genuinely surprised. I didn't think of it as being particularly disgusting or excessive. But clearly I was wrong, because a number of people have complained - not complained, observed - that very thing.
"The fact that I didn't think much was going on in that direction may speak a lot about my relationship to the world in general. The last few years have not exactly been kind to me. A number of people have passed away. I had a nasty encounter with Mother Coma and almost passed away myself. So I have a vision of the world as being a lot darker, perhaps, than I did when I was 31 and wrote the Books of Blood." 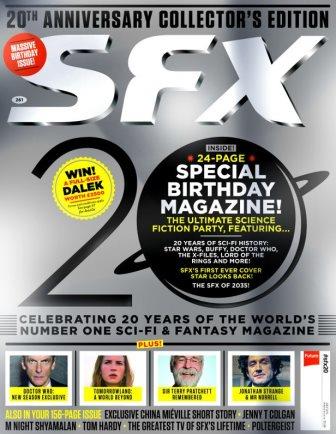 "I have wanted to share this vision of Hell for as far back as I can remember... I grew up in a post-war Europe, and that always seemed far more immediate and terrible than any Dantean depiction of Hell as this very tidy place with nine circles, each of which is cordoned off to special kinds of suffering or damnations. The apocalypse will not be organised. Why then should The Pit? It seems to me that if Hell exists, it would be like the Warsaw ghettos as run by the Nazis...
"Keeping in step with the themes here, the original model for Pinhead was the Nazis. Himmler, specifically. Here was a man who had occult ties and a fiendishly sadistic side, but somehow kept himself at arm's length from the 'unseemly' side of the Holocaust. For god's sake, he once went to a concentration camp and passed out because blood got on his glasses. That's a fascinating psyche, and I've never really been able to shake the imagery loose. Pair that with the fact that I thought it was time the bastard got what he deserved, and it becomes undeniable that there's a story wanting to be told. It became a novel when the story informed me that there was a much bigger plot afoot. Books are funny that way."

"I adore the fact that people find their own meanings in my art. When I paint, I myself rarely have any idea where it is going. By the time a painting is finished, I usually take a step back from it and ask myself, 'Who is this? Where do they come from? What do they love, or fear? What turns them on?' I frequently show my paintings to friends before I have even figured out what they are myself, and I am always delighted to hear what they see in the painting. Any art, by the simple act of observing it, becomes your own. Different people see different things and their imaginations guide them to a solution that pleases them in one way or another. So, the short answer: Yes, I love when the audience uses my paintings as a catalyst to their own imagination."

[Can you tell us a two-sentence horror story?] "A husband and wife with no children of their own woke to the sound of a crying baby, its despairing shrieks emanating from their closet. The husband investigated, and only found more questions when he uncovered the hidden shoebox containing polaroids of his wife as a pregnant teenager."

[Re. The Mummy] "There was great fun to be had back then simply tossing these ideas back and forth with Mick [Garris]. His cinematic knowledge and recall is truly impressive, so he was always able to warn me when we were treading on cliché, so we could avoid it. Of course, it was cliché the studio had wanted all along, and if we'd only had the good sense to deliver it, we probably would have got the picture made."