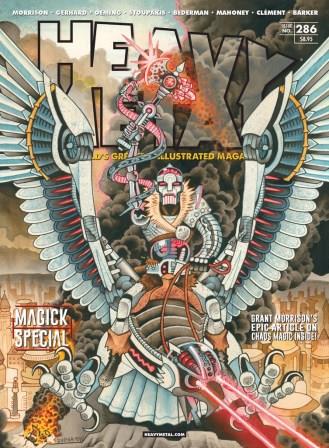 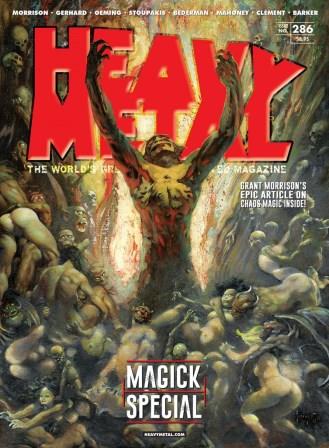 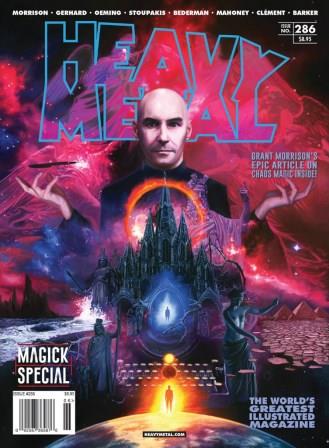 Heavy Metal, No 286, May 2017 cover A "What's fascinating about magic is that it can take on limitless forms. It's in the Vatican, it's in our folklore, it's in our children's stories, it's in our lullabies, it's in the legion of rhymes and schemes and plots laid against the enemy, whatever the enemy may be, and it's all placed in the form of something that can be recited. Example: 'Gentle Jesus, meek and mild,
Look upon a little child;
Pity my simplicity,
Suffer me to come to Thee.'
"That's a piece of magic. It's an incantation! So, I think I'm influenced, because I see magic and its proliferation everywhere."

"I'm better than I was... it's taken three years for me to get better but I am getting better. "I can't get to people right now but I don't want them to think I've gone anywhere... I want to be able to talk at conventions and things like that and not have people worry about me, because these are nice folks and they do worry about me. "The thing I would love to let everyone know is that I'm working hard and that, even though I'm not as public as I was, it means zero in terms of my commitment to the work which remains as strong - as you both know - as it ever was. Physically I'm not at present able to paint the big paintings but I'll get there, and in the meantime, yeah, there's literary stuff going on. "Abarat 4 is almost finished and Abarat 5 has been plotted. But..., because there are so many illustrations in the books and they're all painted, it takes a hell of a long time to produce those books. They won't be out 'soon.' There's a lot of publishing work to do - you know, which picture goes where and we've got design issues and so on..." 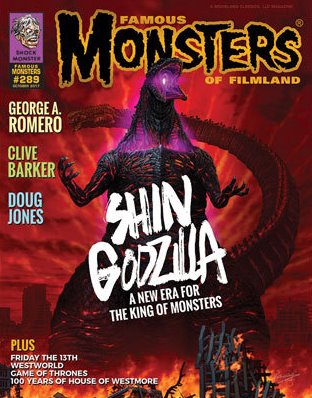 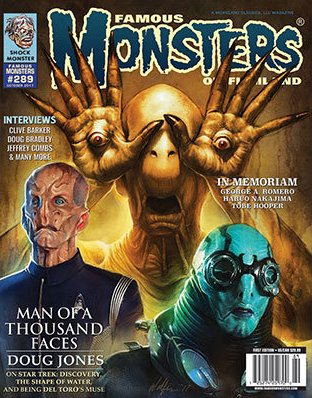 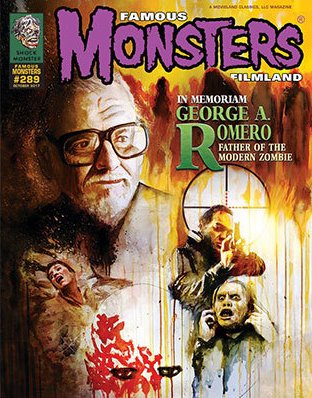 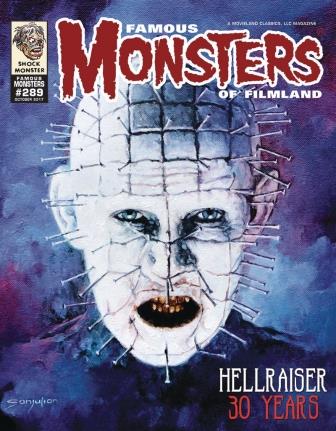 Famous Monsters Of Filmland, Issue 289 Cover D, October 2017 "I frequently find myself lamenting the fact that my fantasy novels, Weaveworld and Imajica and The Thief of Always, are less known than Hellraiser. These are stories of hope, stories that will make people feel something besides dread. There is already so much dread in the world and I enjoy giving people art that focuses on beauty. That is not to say that I actually lament Hellraiser being so popular. People love it and I am eternally grateful for that. I'm a working-class kid from Liverpool; the son of a dock worker. The fact that I get to tell stories, of any kind... the fact that I get to give people some joy in their lives, whether that is in the form of horror in Hellraiser or the beauty of Abarat... to inspire people to tell their own stories... It's far more than I could ever have asked for. So, do I lament the fact that Hellraiser is the primary focus of all my work? Sure. But then I actually examine that feeling and realise it's preposterous. Hellraiser is a household name, and my other work is available to anyone who desires it. I am unbelievably fortunate." 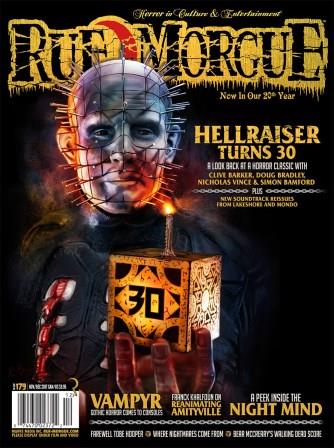 Rue Morgue, Issue 179, Nov/Dec 2017 "The fact that there's so much horror on television is a little troubling to me because, personally, I like cinematic horror. I like to go in with a lot of people to watch something that scares me, but also that television is something you watch in your front room while eating a cheese sandwich. It's not by its very nature going to be as intimidating as going to see a movie with people who are also scared... I think the kind of eeriness and edge that cinema can give you - the sense of being in the drama - is not likely to be as strong when you're looking at that drama on a relatively small space on a television screen as opposed to a cinema, which is an overwhelming image.
"Seeing a horror movie on a screen with a good sound system becomes intimidating right there. I don't think you can intimidate people quite so much with the light bulb in the living room, the cheese sandwich in hand, the kids playing on your feet." 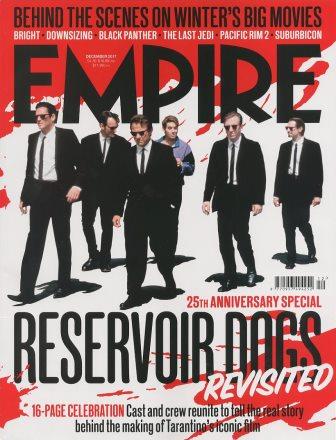 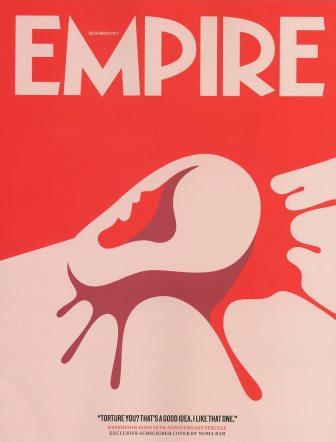 [Re: Hellraiser] "I'd done sketches for quite a while of heads with barbs coming out of them. I used to go to gay bars, and if you look at Robert Mapplethorpe photographs from that period, [he] was photographing a lot of men in black leather. There was certainly an S&M nuancing in there and it's part of the subtext of the movie."