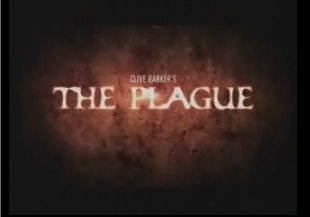 "We have two 'go' films right now: Midnight Meat Train and Plague - which is the picture we are producing with Seraphim - Plague is already in pre-production."

"We are also producing a movie - a horror movie - called The Plague. We'll start shooting in Louisiana in just a few weeks time - which was brought to us. We liked the script to great deals - it's a horror movie - and so Seraphim is producing that."

Clive Barker On The Phone

"We are going to be making the movies - Midnight Meat Train is ready to rock and roll, we've a start date for the beginning of July for The Plague and we're casting right now and so that all seems to be working."

"We have here two movies both in pre-production at the same time, which is a lot for a little - you know there's only three of us in Seraphim - so we're trying to service these three films: actually we have one partner who's there with us, and obviously we have people there with us from the two companies who are funding the movies, but really our controls lie with us and we've got to be everywhere, got to have eyes everywhere. So, one of them is being shot in Winnepeg, starting in two weeks' time - that's The Plague, and then I think we've got, presently, a 17th of October start date for the shooting of The Midnight Meat Train and so they are in active pre-production now."

Rummaging Through The Toybox: Plushes, Plagues and Plaudits

"It's a very different style of horror, I'm not sure in the strictest sense it even is horror. My style is usually a bit more graphic, but there is definitely an audience out there for this type of film, as we've seen with a lot of Japanese movies. They really don't want anything too extreme. This feels more like it belongs to that subgenre of being disturbing and unsettling and beautifully performed. I'm more tempted to want to call this film 'creepy' rather than [outright] 'horror'."

The Plague: The Young And The Merciless

"Plague was a screw-up. I trusted the director and I wasn't going to do to Hal what had been done to me by interfering producers over the years; I had pretty much decided I would let him have his way and if we had to have an argument it would be in the cutting-room about the way the picture was cut - so he shoots the picture and then is absent from the cutting-room most of the time. He did a tough job on a very tough schedule but there were things that I begged for at the end, for the producers to throw in some extra money towards Hal so that he could go back and do a couple of extra days' shooting but they shook their heads and that was the end of that. It is not a movie I am pleased with or proud of - it feels compromised and Hal got in his car and drove away before the picture was even locked... There were some great scenes, there really are some great scenes and the central notion is wonderfully perverse and apocalyptic but I don't think Hal served his script how Hal-the-screenwriter imagined it, it was not the movie I read and that Hal pitched to us, a real shame as the script was just so damn good."

"In a small New England town, David wakes up to check on his young son Eric, only to face every parent's nightmare: something is terribly wrong and the child will not wake up. David races Eric to the local hospital to get urgent care, but when he arrives, he sees that he is not alone... every child on the planet under age 6 has slipped into a mysterious comatose state...
"Thirteen years pass, and an entire generation of youths have remained in their suspended state, connected somehow by a twice-daily seizure which grips the world and keeps their muscles active. The world has not been able to solve the mysterious ailment, and people have stopped reproducing, as any new children immediately fell victim to "The Plague." The world is a changed place. And parents like David continue to care for their children, hoping for answers which never seem to come...
"And the next day, for no apparent reason, Eric and the other children suddenly wake up... and attack! Eric smashes David's skull in, and Tom and Jean are barely able to escape the onslaught. The frighteningly well-developed youth (a function of the muscle development) are silent and somehow mentally connected as a strong, angry, ferocious horde, hell-bent on eliminating the adults who have cared for them all these years. They are smart enough to cut all forms of communication and transportation, leaving Tom and the others isolated in the small town, with what little information they can clean from the child-horde's direct activities..."

Anthony di Blasi : "All the children of the world under 8 years old fall into a coma, The Plague is essentially the story of the extinction of mankind. After ten years, the children wake up and want to kill the world. The ten years they were asleep served as an incubation period, where the children develop their powers. When they awake, the bloodshed begins. Basically, in this story, God cleans house.
"The movie has very dramatic undertones; in our story, James has to face his inner demons, as well as those on the outside."

Clive Barker's The Plague About To Spread

Phyllis Laing (President, Co-founder Buffalo Gal) : "There's four male producers on [The Plague] and obviously my role is going to be den mom. I don't mind that at all. I'm happy people feel they can come to me with just about any problem and have a calming influence... usually."

Anthony di Blasi : "The shoot was great. It was 20 days on a $3.5 million budget. We shot it up in Winnipeg and had a great crew. I was the on-set producer with Jorge Saralegui, and we all worked our asses off. I shot some 2nd-unit stuff with the film's co-writer, Teal Minton. We all got involved and it was a really good time... The local talent in Winnipeg was so much stronger than we'd anticipated, and we had a lot of kids to cast. They were the most professional actors I've ever seen. They memorised everything.
"The post process should have been the easiest part, but it wasn't. It just became very choppy, and the decision was made by Armada and Sony to release the film direct to video rather than theatrically."

The Plague: The Young And The Merciless