A Revelatory Interview with Richard Kirk
By Phil and Sarah Stokes, 30 September 2002

...Richard Kirk has been visualising the Five Dominions of Imajica and their inhabitants for several years, from his four illustrations for the Zehrapushu Inc. CCG series in 1997, through to the sixteen images that illuminate Hans Rueffert's new appendix to the recently-published HarperPerennial edition of the book in the US.
A Canadian visual artist and illustrator who has also illustrated books for Caitlin R Kiernan and Poppy Z Brite, he has a distinctive style that can be sampled by a trip to his on-line gallery and at the Luna7 site. Several of the original illustrations are for sale at those sites.
He recently gave us an insight into the challenges and rewards of interpreting Imajica... 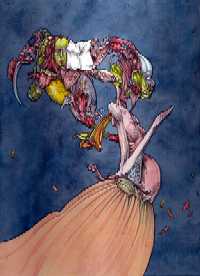 Revelations : "How did you come to be involved in the original CCG series?"

Richard Kirk : "A few years ago, I was reading through posts on alt.books something or other when I came across a post asking for submissions of illustrations for a project related to Clive Barker's Imajica. So I sent Hans Rueffert an e-mail and later a sample package of my art. I believe that Hans and his partner reviewed the portfolios with Clive. Hans then e-mailed me a list of various subjects and page references. Interestingly, I had read Imajica when it was first published and I have a distinct memory of saying out loud, 'I'd love to illustrate this book!'
"Over the years Hans and I became close friends and we were always working up projects together. Clive asked Hans to do the appendix and when he mentioned this to me I naturally said, innocently, 'That would look rather wonderful with some illustrations', or something like that.
"Originally the illustrations were only intended to be spot decorations but it was rather like trying to fill a teacup from a fire hose. The illustrations kept growing in scope until they were full page. It was fantastic to collaborate with Hans on this book, he was very supportive."

Revelations : "Your images for the CCG cards were full colour whereas the latest works are black and white pen and ink, like much of your other work. Which is your preferred style?"

Richard Kirk : "My early exposure to art was through the illustrators that worked in line; Beardsley, Tenniel, Peake and so on. Its was these kinds of artists that made me want to make images in the first place. I love the expressiveness of black and white work. There is no question that monochromatic mediums are my favourite and I believe that is where I have found the most distinctive voice. I believe that black and white captures the essence in a way that colour can not. I am pleased that I was able to do Imajica in a way that referenced traditional book illustration."

Revelations : "When approaching the illustrated edition, were there any characters or scenes that were 'must-draw' images that went through many different sketches before reaching the published book?"

Richard Kirk : "The Nullianac and the Unbeheld were two that I wanted to do right off the bat. Yzordderrex was one we knew that I would do at a very early stage because it is so central to the book. It was Clive that suggested to me that Yzordderrex be a two page illustration. I did a lot of sketching around the creatures such as the Righteous and Gek-a-Gek. I wanted them to be faithful to Clive's descriptions and also be feasible in the physical world. In Clive's writing there are descriptions of things where he leaves spaces where the readers imagination is allowed to fill out many details and there are other areas where he is explicit. It was about finding a balance. Hans had a really good sense of what should be illustrated from his work on the CCG. I would have liked to have done many more illustrations because the book is filled with such rich source material but time was a limiting factor."

Revelations : "Were there any areas that proved impossible to capture to your satisfaction?"

Richard Kirk : "No - I can think of ton of things that I would liked to have done but I ran out of time for."

Revelations : "Across your Imajica portfolio, which are your own favourites?"

Revelations : "The book's now out - what kind of feedback have you been receiving?"

Richard Kirk : "I received very enthusiastic feedback from Clive, which was an enormous relief as he has said this was his favourite book. In particular I remember him saying that my interpretation of the Nullianac was cool, particularly the rooty sort of head, finger things.
"Other comments have all been positive so far!"