Clive on Salomé and The Forbidden

"These are home movies, they are movies that were made in people's cellars and people's front rooms, with a lot of passion and no money.I think they are interesting little films, almost a thing prophetic about them in a sense, particularly in 'The Forbidden', the atmosphere of dread and anxiety that hangs over the movie and obviously the erotic elements and the nails in the nail board. These definitely prefigure what we see later in the Hellraiser movies. I think they are an interesting artefact, and I am glad they have found their way to video. Just for the average filmgoer, they wouldn't mean a whole heap. For people who are really familiar with my whole mythology and my approach to things I think they are an interesting piece of insight in to how these images and ideas developed over the years."

"The Salomé story: boy, there are layers to that story. It's a very sexual story, it's a very ritualistic story, it's a bargain story. The story had always attracted me. The Bible is a source of inspiration constantly for me and remains a significant source of inspiration. The references to Salomé in the Bible are I think slight but, nevertheless, Biblical stories, if they are good stories, have a kind of primal quality to them." 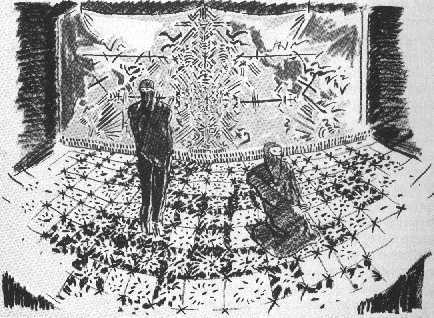 "I made two films which went on to be put on video: Salome, which I did when I was 18, and The Forbidden, which I did when I was 19. Both short, dark pieces. Salome is seven minutes long and shot on 8mm; The Forbidden was shot on 16mm, but we printed it in negative because we didn't have the money to print it in positive. We designed the whole thing to be shot on negative. I was quite surprised to see how many people got something out of them on video. I mean, they're 25 years old. God help us - 25!
[Kenneth Anger influence] "I saw Anger's movies at a very active little film society in Liverpool in the sixties. Liverpool was quite a place to be in the sixties. Ginsberg had come over and called Liverpool the Haight Ashbury of England. It was a place where poets and, obviously, musicians - the Beatles and all the many bands that followed in their wake - were active. So I saw all the Warhols and the Angers and the usual suspects at that time. One of the things it made plain was that all you really needed was a camera. These were not technically very proficient pictures. There was something rather homemade about them, and that was very important to me. At a certain point in your life, you think, "Oh, now, wait a second! I can do this!" And it worked. The image that stick[s] with me, specifically from Forbidden, is the skin-peeling scene - all done with things you can find around your house right now. (Laughs) Torn T-shirts and pins and paints and baby oil, and a whole lot of patience from a whole lot of friends, many of whom have gone on to other things. Better and brighter things. Pete Atkins, who is the body that's being skinned in that particular scene... He wrote Hellraiser 2, 3, and 4. Doug Bradley, who's in it with his now wife, is the man behind the pins in Hellraiser. It was a very creative time, a time when anything seemed possible. It was wonderful to have those models. Anger is a prime example of a filmmaker who just went and told his own mythology."

"Like a psychic's production of automatic writing, the work we create when we are young can be a powerful clue to what obsesses us. In a

trance of innocence, without the demands of commerce or self-consciousness, we speak with a purity that is difficult to acheive in later work. Not that purity is necessarily a great artistic virtue - some of the most boring art I know values that quality far too highly - but in the scrawl of an unwitting mind there may be interesting codes to be broken.
"[These films] are technically extremely crude and their story-lines obscure: Salome vaguely follows the biblical tale of lust, dance, martyrdom and murder, but only vaguely; The Forbidden, though derived from the Faust story, is steeped in a delirium all of its own. Notwithstanding, the images still carry a measure of raw power some two decades on, in part perhaps because the context is otherwise so unsophisticated.
"[Kenneth] Anger's films, with their mingling of homosexual signals, impenetrable occult symbolism and sheer cinematic brio mesmerised me. They formed in my mind a bridge between work I might attempt myself (they weren't technically very polished), and the more mainstream films that I had an appetite for: horror, science-fiction, biblical epics and musicals. Here was a cinema of hallucination, lushly stylised and perversely metaphysical. What more could I want by way of a model?"

"I remember when we got £300 from the Liverpool Film Association or whatever, I showed the man Salomé and I was squirming with embarrassment at how rough it was, but he was astonished at what we had achieved."

"I think [The Forbidden] has a weird sort of life to it and it's interesting because it contains all those imagistic prophecies of things that would later appear in either the short stories - tattooing, voyeurism and so on - or in the Hellraiser movies, obviously. So put together with Salomé, even though they were movies made at the most primitive level (I think the only more primitive way you could do it is to take a length of film and draw on each frame!) actually I think it has a strange poetry about it - they both have a poetry about them - and they do fix in time who we were at a certain point and what our obsessions were - perhaps more particularly what my obsessions were... And so when Frank is skinned, obviously, in Hellraiser, it is a direct development from the moment in The Forbidden when Pete has his skin removed."

Pete Atkins: "[The Forbidden] was never edited together. It started life as an adaptation of 'Doctor Faustus'. It was sixteen millimeter. There were some interesting techniques in it. It was actually shot in

negative to look positive. In other words, all the body make-up and things were painted on in reverse to give a very strange result. It was very rich and odd-looking. We would have people walking around and it looked like animated footage except it was me covered in body paint. Frankly, it's too arthouse to appeal to the majority of people who liked Hellraiser, Hellbound or Nightbreed."

Pete Atkins: "Yes, it [the scene on the Hellbound video cover showing the Cenobites as surgeons] exists. And it is on the cutting room floor. Which, quite frankly, is where it belongs. It was a sequence that just didn't work. Maybe I wrote it badly or maybe Tony shot it badly, maybe Doug and Barbie performed it badly, whatever... It was just naff so we cut it out... I actually put the scene in as a tribute to Clive because one of his first sketches of Pinhead, before the first movie was made, was of him in an apron which looked like a cross between a butcher's smock and a surgeon's gown. Also, The Forbidden, which was a 16mm film we made years ago when we were all in the Dog Company, was at one stage going to be called Surgeons of God... So it was a little nod to the past.
"I did, in fact, have the lead role in that but, since it was made in '78 on 16mm, I don't think it likely that many people are going to see just how charismatic and beautiful I was before drink, drugs and social diseases rendered me the sorry creature you see before you today!"

Doug Bradley: "One image that I remember strongly, from The Forbidden, was that Clive had built what he called his 'nail-board'. Basically, it was a block of wood which he squared off and he banged six-inch nails at the intersections of the squares. When I first saw the illustrations for Pinhead, it rang a bell with me. Here was the idea he'd been playing with, the nail-board, from The Forbidden. Now, ten or fifteen years later, here he'd actually put the idea all over a human being's face!"

Salome and The Forbidden video release

Interview on the Redemption video [1995]

Pete Atkins: "Clive must have been about 19 and I think he had a neurotic desire to make a movie before he was out of his teens, that was the motivation behind [Salome]. Doug played Jokanaan with a papiermache head. Then there's The Forbidden, which is another Faust story, my cinematic debut - I played the protagonist in that. We had graduated to 16mm by then, but it was never edited together."

Pete Atkins: "We thought, rightly or wrongly, that what we were doing was significant, important work. To some extent we were, and to some extent we were the usual snotty, conceited 'we are the centre ofthe universe' group. But it was a very exciting, exhilarating, liberating time. A lot of what we discovered then is certainly being used now, both informationally and subconsciously in terms of how we do things and the things we choose to do."

Salome and The Forbidden video release

Interview on the Redemption video [1995]