"There’s been a period in the last seven, eight months where all I’ve done is written stories, and one of the odd things, and you know this very well of me because we’ve talked about it, when I write stories, when I start to create in that mode of story generation, a certain, I suppose it’s chemical almost, some process kicks in which makes me do more and more of it. So by the next time we talk I will give you a number but, in addition to the twenty that I’ve been talking about I’ve also generated a bunch of other stories which I didn’t intend to.
"I get into a state of mind where the creation of story becomes the only thing I can do. The only thing I’m obsessed with. I go to bed thinking about story, I can’t stop thinking about it and for the last six months because I’ve been house-ridden, partly because of Covid, partly because of not feeling good, I’ve been here every day, so fourteen hours a day, writing and I don’t know I’m going to guess forty stories – twenty plus another twenty – narratives are now extant and I can’t explain how this works or why this works it’s just that I suppose in a way I’m like a glutton who once he starts feeding can’t stop feeding. I get… everything presents itself as a form of narrative.
"The reason I want to talk about this, if it would be of interest to you and to everybody who’s reading this is because there is something about seeing things in narrative form which is something I was given, born with I suppose, and I think a lot of other people are born with it obviously, just like people are born with another form of storytelling, which is joke telling. You know, there are people I’m sure in your circle whose conversation is basically jokes – it’s another way of summarising experience but with a funny ending. I summarise experience in a different way and in the last, let’s say eight months or whatever, it so happens the world has presented me with almost endless subject matter for dark stories. This has been a very dark time in our planet’s history, and whether we’re talking about Ukraine, whether we’re talking about Putin, whether we’re talking US politics, whether we’re talking about global warming, it’s hard to keep your eyes open and look without feeling anxiety. Now, the way I deal with anxiety is by telling stories. Stories are structures which contain my unease. By putting a pattern onto that unease. Yes? It doesn’t necessarily mean that by stamping a design upon things that I’m fearful of I make the fear go away, it doesn’t work that way, but what it does do is give me the illusion of control."

"I think the future of everything is queer... 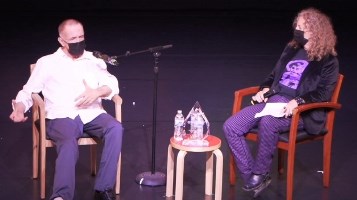 "I think we've got to stand up for the complexity of who we are. There's an English phrase which you won't know but, 'All the world is queer save thee and me, and you are a little queer.' That was taught to me by my mother at the age of four. She did not know the subtext of 'queer' at the time but it's an interesting phrase. What it's saying is - and they didn't mean queer in a sexual sense, they meant odd - all the world is odd except you and me - and you're a little odd. In other words, I think what the phrase is saying is none of us are 'normal'...
"Normality is something you can either live, or be pushed to the outside if you don't. The fact is that nobody is normal.
"There's a wonderful phrase: 'We are not hypocrites when we dream.' When we dream, we can't be hypocrites, we can't lie to ourselves about who we really are... I think it's a great phrase and it's something that I really believe, I mean I have really sexy dreams and I'm not feeling hypocritical about that!
"What I've always done as a writer, and as a painter, and a filmmaker, is to say the things I feel in dreams, which are things that are not normal, because normality is dull."