"[When I wrote The Hellbound Heart] there was a sense that I was referencing what I knew of the very early stages of a nascent community. These people that enjoy pain and often times fetishise themselves, it was something that was fresh to me... Now, though, I think we've got to push it a lot farther. So much of that stuff is 'been there, worn it, pierced that.' You know, that imagery has come in and out of fashion so many times that we have to push a lot 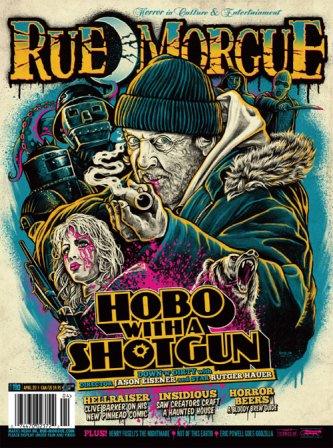 Rue Morgue, No 110, April 2011 harder to use that imagery in a fresh kind of way. It's definitely going to be a challenge, but then, horror has always been a challenge...
"[Robert Kirkman (writer of The Walking Dead)] was doing an interview about making comics scary. He said it's a very, very difficult thing to do. He gave some pieces of advice, which I've been following carefully, because I think he's absolutely right. Comics don't have an easy rhythm to them where frights are concerned. You can't control people's reading habits the way you can their viewing habits when they're locked in the cinema. Part of the essence of being scared is losing control. In the theatre, you're obliged to watch the monster come whether you want to or not. Even with a DVD, you still have to find the pause button if you suddenly find yourself overwhelmed. Reading is a much more leisurely pursuit. You can put the book down. So, yes, I feel it's important to include as much of the scary stuff as possible. When people put this [Hellraiser] comic down, I want it to be for the right reasons."

By Peggy O'Leary and Kodiak Middle School, Beneath The Surface Of Clive Barker's Abarat, May 2011

"There are some bad characters coming down the pipe towards you that are even worse than the ones we have so far and I can't name them because that would spoil it, but there are some. If you think the people that we've met so far are bad, there's much worse coming. But right now, the really, really bad one is

Mater Motley and I think she is pretty much beyond help, you know? I mean Christopher Carrion, I think, is one of those characters you think is going to be hopelessly evil, but turns out to have something more interesting going on in him, would you agree with that? But Mater Motley is just horrible! All I will say is Mater Motley is a very, very, very bad human being, a very, very bad Abaratian. In terms of good, I love Diamanda. Diamanda is named for a friend of mine called Diamanda Galas. Diamanda Galas is a singer and she is a great friend of mine and she is a wonderful lady and I wanted to honour her by giving her the name of one of the great, good characters in the book, you know. I don't think that people should be dull or uninteresting. And I think Candy is a good person and I think she's learning to be good - I don't think she's good at the beginning of the book; I think she is on the fence, if you will. I think Candy is the way lots of us are at fourteen, fifteen; we could go either way. I think Bill Quackenbush, her father, is a very, very, very bad human being. And I tell you, knowing what happens in Book Three, we have just begun to see how bad he is. So, those would be my opinions...
"I think evil, and this is a generalisation, but it's my experience, being 56 years on the planet, evil is far less interesting than we think it is, OK? I know you said you like evil characters; but truly evil people that I have met have not been very interesting - they've been cruel, and boring and dull and stupid. For the sake of telling a good story, I can't make all my villains dull and stupid! I have to make them something more interesting than that otherwise you'd all be yawning and putting the book down! The stitchlings, for instance, will fall into that category. They'll fall into the dull, stupid category and every now and then there has to be an evil character who has charisma - you know what charisma is? The power to charm people and to attract people - Hitler was like that, Hitler had immense charisma. He was a terrible, terrible man and he was responsible for the deaths of six million but he was a man who could galvanise an entire country. He could turn Germany and Italy and later Japan, he could turn entire civilised countries to his will, so there must have been something that was going on in this man that was not dull and boring. But I think in their hearts, in the deep dark places inside them there's an emptiness, a terrible emptiness and it's that emptiness, which is really the beginning, I think of evil. I think it is being unloved which is the start."

An Evening With Clive Barker

Platform interview by Edward King at the Irish Film Institute before a screening of the short films, Salome and The Forbidden, 13 July 2011

"I got to make my movies before I turned 20 and I will make no great claims to them as great art but what they did do is take away my fear of making movies. I would not have made Hellraiser if I hadn't made these movies: they were just... it wasn't something to be scared of.
"I think, a lot of the time - and this is true of the arts generally - we are terrorised by 'experts.' Fuck experts. I think it's very important that as artists we take these possibilities, even if they are very minimalist in terms of finances or whatever, we take what we've got and we make it, we do it, we get on with it. If we stand around and wait for someone to say, 'OK, you are now a film-maker, you have done the right number of examinations,' or, 'you've been to college,' or 'you've done this' or 'you've done that,' you'll wait forever. And life's too fucking short...
"There are times when it's important to say, 'I am an artist.' There are times when I have to stand up, I need to have the freedom to say, 'I'm an artist and it's important that I think of myself as such.' Otherwise you get minimalised. You get little enough significance as artists but you get even less significance unless you stand up and say, 'That's what I am, that's what I'm doing, live with it.' What I found was that my ignorance was my best defence and I think that's been pretty much the case all the way through...
"I think that you can get self-conscious and, to me, the whole idea of art is that you clear away the scrub, the crap between you and your heart and you put it in as pure and as clean and as passionate a way as possible onto the canvas or the screen or the page and you give it - and give it, I stress that - as a gift of love to other people. If I could do it without having to charge people for it, that would be infinitely my preference..."

"Wouldn't it be neat to have a book where firstly we had someone who knew what they were doing when they came to a world, as opposed to wandering around not knowing, because that kind of gets old after a while, and it's actually something that plays out lots of times in those kinds of stories. And secondly, to actually give that person, whoever it's going to be - and I didn't know whether it would be a boy or a girl at that point - give that person a method and a purpose that was vast, potentially huge, potentially epic. Potentially.
"This is a sort of nature / nurture thing and it's going to remain a nature / nurture thing - does Candy find her way to a destiny which was pre-destined for her, or pre-asserted for her - right? - or does she invent that by the very nature of her being? Which is the point at which, I would argue, the book becomes a universal book. Because then it's about all of us, right? And I want it to be a book about all of us, I didn't want it to be Harry Potter - Harry Potter is about a very special boy, I didn't want this to be about a very special girl, I wanted it to be about a girl who could be anyone and even though, yeah, she seems to have some elements of uncertainty in her nature, we're going to discover that we all have those uncertainties in our nature, at least to some extent, and then the question is how do we deal with them?"

HorrorBid Talks With The Master Of Horror, Clive Barker!

"My major ambition was to write a story that had great characters. And I think great characters in a great story - like say, the first Star Wars movies - are universally appealing. It doesn't matter who it's written for. It's who wants to read it in the end that matters. And it turns out that adults and children want to read these books. That, to me, could not be a more delightful surprise... I went on Twitter recently and asked what people thought about the fact that there was no sex and violence in the Abarat books. Every single person said 'I don't miss it. It's not relevant to the story.' I want people to be enchanted by Abarat. Not aroused or nauseated."

Clive Barker Gives Us The Latest On The Abarat Movie

"There is [movement on an Abarat film]. But it's nothing I can share with you right now. All I can say is that it's very optimistic."

[What's your favorite line from a book?] "Call me Ishmael." 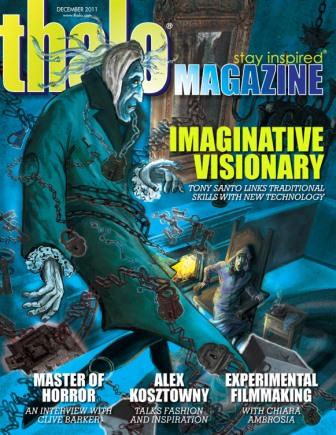 Clive Barker: The Man Who Changed Our Definition Of Horror And Imagination

"My biggest challenge is trying to find the time to do all the things I like to do and I haven't found a way to overcome that. I do love to paint. I do love to write. I do love the theater. But I haven't found a way to balance all of those things in my life. I never tried to be a person that was always doing a lot of things. It's simply the nature of my enthusiasm. And to say you've mastered something means, to me, that you can pull it off in a heartbeat. There's nothing like that in my life. There's nothing I've achieved to that degree. Everything is a struggle. All the time. So I'm not a master. I am at best, a hopeful apprentice. I travel, but the route turns out to be somewhat nomadic when I look at [it] from a distance."