...As we took our latest tour through the canvases at Clive's house, Clive pointed out two that were painted with Abarat in mind but that will not now be finding their way way into the Abarat books...
We're always fascinated by the 'ones that get away' and why. So, with thanks to Clive, this page presents a couple of examples of how the images and narrative of Abarat form and change in the creation of the Abarat books...

The first of the two paintings is familiar, or at least this detail from it is... 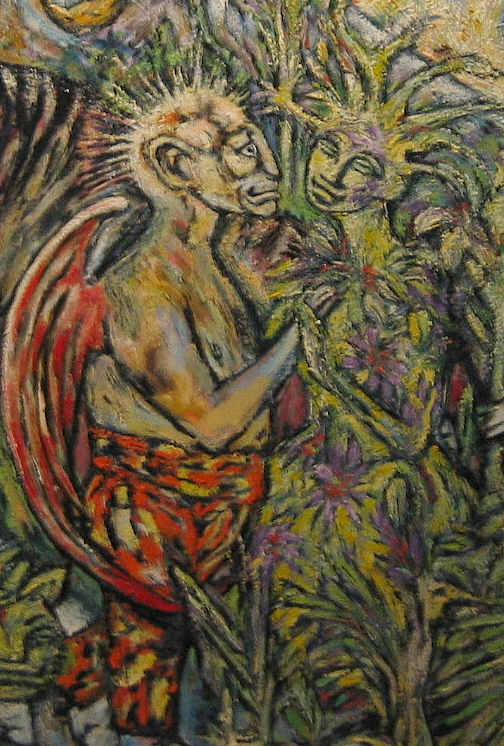 ...And here's the full painting that has the two then-unnamed lovers down on the right hand side. 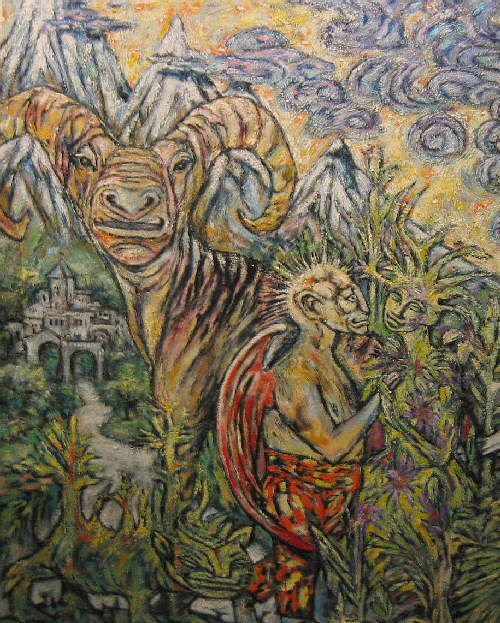 ...Deciding that the two figures and their dog were the most interesting elements of the original painting, Clive decided to repaint them but brighter and more centre stage. With the second painting, the haunting story of Elathuria the beautiful plant and her true love, the gentle, shy Fathathai called Numa Child developed. That second painting as it appears in Book Two of the Abarat is shown below along with a portion of their tale of endless partings... 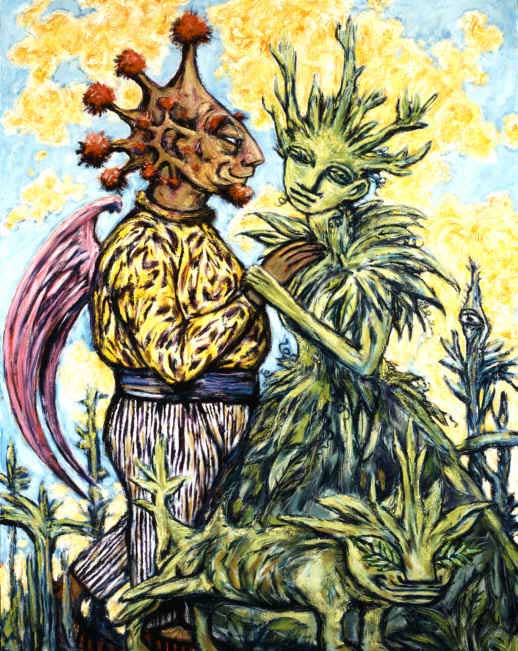 Extract from A Time of Monsters, Abarat Book Two

"Numa Child told Elathuria instantly. 'Lady,' he said. 'I will never love anyone the way I love you.' And much to his surprise, Elathuria invited him to kiss her.
" 'Quickly,' she said. 'Because the sun is hot and the hour is passing.'
"Numa didn't think very much about the significance of this. He was simply happy to be invited to kiss his beloved. And as they kissed and talked and kissed again, the hour of the Nonce ticked away..."
"This isn't going to end happily, is it?" Malingo said.
Finnegan didn't answer. He just went on with his story. "When Numa Child kissed her again, there was a little bitterness on her lips.
" 'What's happening?' he said to her.
"She told him: 'Time is passing, my beloved.'
"And to his horror, he saw that her blossoms, which had been so bright and beautiful when he'd first set eyes on her, were beginning to turn gold and brown."
Finnegan's voice, as he told this part of the story, grew soft and full of sadness.
"Finally she said to him: 'Don't leave me, love. Promise me you'll never leave. Find me again, wherever I go. Find me.' "


...A different story with the second painting. Clive first envisioned the Wormwood, Christopher Carrion's warship, in 1999 - before he set to work on the draft of the book. A pastel drawing was worked (across three sheets of paper) with the double figureheads on the calm waters of The Izabella. A version was painted with more animated figureheads navigating more ominous waters. Later, having described the warship in detail in the narrative, the vessel was more menacing than the original painting suggested and so the second version was painted more closely to illustrate the book's description of the Wormwood... 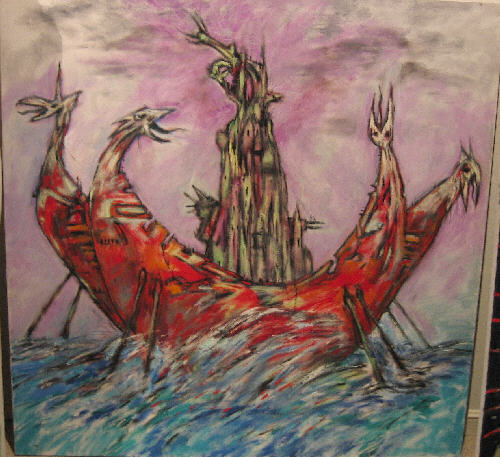 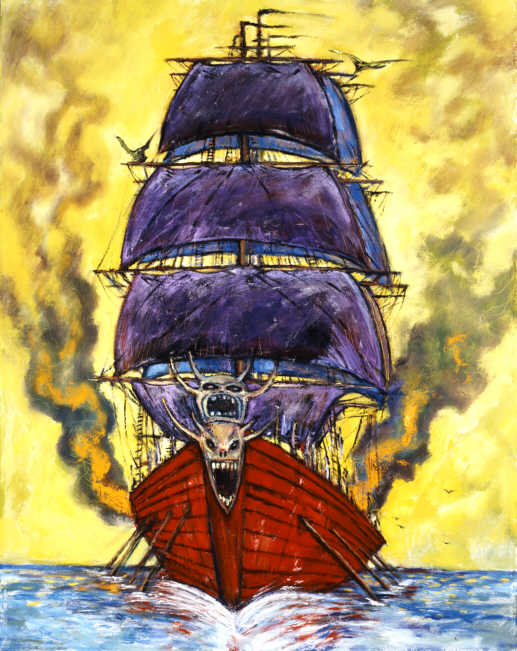 Extract from The Sea Comes To Chickentown, Abarat Book Two

The vessel was so terrifying a sight to some of those who'd assembled to witness its arrival that they fled in confusion, offering up panicked prayers of protection against its appearance. They had reasons for their terror; it was in every way a hellish vehicle. Smoke rose in columns of black and red from ports along its flanks and from its central tower. At the bow sat not one but two demonic figureheads, one looking heavenward, one into the depths of the Izabella. At the stern sat their brothers in grotesquerie, looking out to port and starboard. The smoke swirled around them, lending them a terrible liveliness, as though at any moment they might unroot themselves from the structure of the ship and swim off to make some terrible mischief.
The Wormwood had not one but two means of propulsion. In the dark depths of its hold were slave giants: creatures from the mountains of the Isle of the Black Egg, who would live out the rest of their long lives chained to the oars of the Wormwood. But the greater power that pressed the Wormwood forward was the wind; and the sails that captured it were vast and purple: the final proof, if any more were needed, that this was a vehicle that traded in cruelty and despair.

The Scattamuns from acrylic to canvas
Three paintings from their original sketches through to the canvas
Mater Motley, a procession of sketches