Clive on The Damnation Game

'What's happening?' she asked under her breath.
A gruel of filth had started to seep over the lid of the toilet and dribble onto the floor. Wormy shapes moved in it. She shut her eyes. This was a fabrication, conjured up by the European to subdue her mutiny: she would ignore it. But even with cancelled sight the illusion persisted. The water splashed more loudly as the flood rose, and in the stream she heard wet heavy things flopping on to the bathroom floor.
'Well?' said Mamoulian.
She cursed the illusions and their charmer in one vitriolic breath.
Something skittered across her bare foot. She was damned if she was going to open her eyes and give him another sense to assualt, but curiosity forced them open.
The dribbles from the toilet had become a stream, as if the sewers had backed up and were discharging their contents at her feet. Not simply excrement and water; the soup of hot dirt had bred monsters. Creatures that could be found in no sane zoology: things that had been fish once, crabs once; foetuses flushed down clinic drains before their mothers could wake to scream; beasts that fed on excrement whose bodies were a pun on what they devoured. Everywhere in the silt forsaken stuff, offal and dregs, raised itself on queasy limbs and flapped and paddled towards her.


"Anthony Breer, wandering around, putting on more and more aftershave 'cause he doesn't realise he's dead... In the horror stuff, and indeed in the fantasy stuff, I think it's important to mingle the humour with - and humanity - with the horror and the fantasy, and I think my feeling is on a Clive Barker book, hopefully when you turn the next page you're not quite sure what you're going to get next and that's what I'm always aiming for."

"The chief perspective for me, in 'The Damnation Game', comes when Mamoulian says, 'Every man is his own Mephistopheles.' This is the 'Faust' story without the Devil. Mamoulian is not only just a guy, but a guy we can relate to, because he's lonely, and all you have to take on board for this book to work is the single idea that he has these few special powers. That flies in the face of generic expectations. It says, forget 'The Omen '. Forget 'The Exorcist'. That's not actually the way the world is."

Barker's Searching For A Higher Plane

"I would like to advance some theses which are a bit unnerving. Very seldom are my protagonists viewing their circumstances without ambiguity, and to write the straightforward type of horror fiction that leaves the reader rigid with fear you need to remove ambiguity. You need the dyed-in-the-wool villain you don't understand, and certainly don't sympathise with. The Damnation Game either has four villains or none, and my conclusion is that it has none. Everybody is morally tainted. I wanted to do a covenant with the devil story without a devil. One of my favourite revelations in the book is when they finally work out that 'they have no devil on their back, just old humanity, cheated of love and ready to pull down the world on its head'. I like that. If finally we look for a source of malice, we look for lovelessness... Obvious pains. On top of these obvious pains come elaborate configurations." 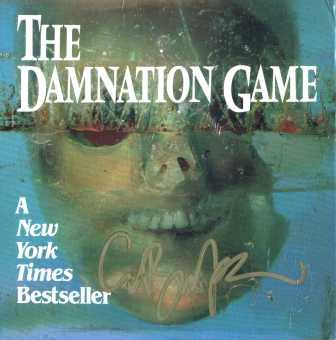 "It got my favourite review from anybody. It was from the BBC who said, "'The Damnation Game' is like 'Zombie Flesh Eaters' as written by Graham Greene." That encapsulates everything - it's tacky, it's art, it's cross-cultural! The book is actually blacker than anything else I've written."

A Little Bit Of Hamlet

"There are certain images which do come from the movies which are very potent and also very horrific and I'm proud of that, I feel a part of a texture of that, and I think to be writing horror fiction now and to be unaware of that would be like trying to invent the steam train while there are jets going over. It's there, it's happening, it's part of the texture of every reader's imagination and it gives you two strengths: it means you can either go with that flow or, in actual fact, you can go against it, and that can also be very nice. So, in The Damnation Game, I have a guy called Anthony Breer who hangs himself and is revivified by the villain of the piece and doesn't realise... Now, without a knowledge of zombie pictures, it doesn't work. The gag only works as something that's bounced off an established notion of what a zombie is... Now Anthony is quite the reverse; Anthony is the perfect gentleman... All of this stuff is just in there, is just the texture of the way that he is. The gag wouldn't work unless we had the movies there to bounce it off."

The Art Of Horror

By Christopher Holland, video documentary The Art of Horror, 1992

"I think one of the best things about writing generic work is that you are working in traditions. I like the idea that I can write a haunted theatre story and that maybe it can relate to other haunted theatre stories. Or that my zombie in The Damnation Game can be in a long and healthy tradition of zombies. Certainly, my zombie gets up to things I don't honestly think any zombie has got up to before!"

"There's no talking to [zombies]. There's no coaxing them. There's no praying to them. There's no asking for mercy or compassion. It's absence again, in a way. You look into their eyes and there's nothing there. It doesn't matter how much you reason, how much you cry. It goes back, I think, even to my school days and being bullied and being the boy with the spectacles, and feeling somehow that nothing would save me if the heavies got me."

Give Me B-Movies Or Give Me Death!

Adrian Cole : "The physical horrors are at times obscene, though the book is designed to shock, to put before us the excesses of the psyche, the darkside of the soul. There may not be an external Creator, but built into us, Barker asserts, is a leveller, and we are the instruments of our own judgement, our own executioners."

Carl Bromley : "Barker's plotting of this novel is ambitious and I suspect if this novel was written by a less able writer we would have a jumbled, often confusing novel."

S. T. Joshi : "In some fashion or other, Barker has here produced a sparklingly flawless weird novel that redeems all the absurdities of his earlier Books of Blood and all the verbosities of his later novels... The portrait of Mamoulian is incredibly complex, and for the one and only time Barker has abandoned his naive good vs evil dichotomy to present a rich and intricate conflict of wills. There is no flaw in The Damnation Game: its structure is perfect, its characters substantial and fully developed, its style pure and clean (he must have had a good copyeditor), and its denouement powerful and satisfying. Although it is part horror story, part historical novel, part mainstream novel, and part detective story, the supernatural premise structures the entire work, and is of such range and complexity as to require novel length for its exposition. And the atmosphere of brooding grimness make us think of Ramsey Campbell at his best."