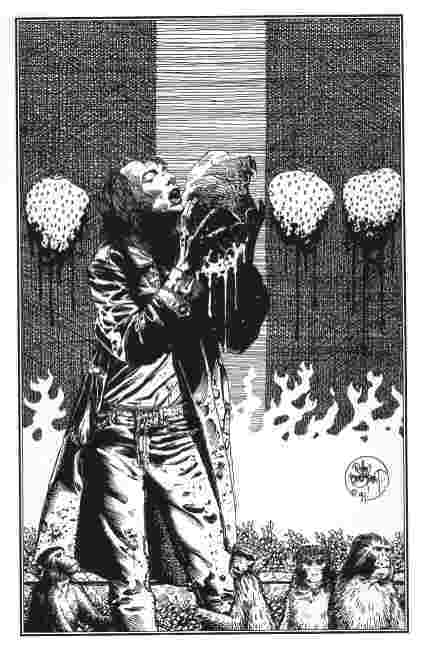 ...It's not often we get to bring something back from the 'things that got away' pages but we're delighted that Desperado Publishing has now published P. Craig Russell and Tim Bradstreet's adaptation of Age of Desire!
Originally scheduled for release in the early 1990s through Eclipse, the collapse of the company resulted in this one being a long time coming. Desperado's release of the book comes complete with afterwords from both P. Craig Russell and Tim Bradstreet as well as showcasing several of Russell's rejected pages of artwork. All together a fascinating collection and highly recommended. 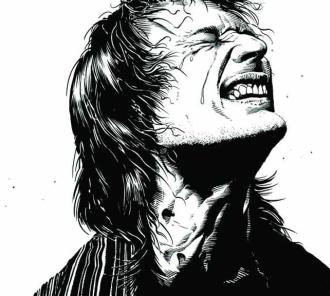 Tim Bradstreet : "Fans of Clive's work will really eat this up."

Illustrator Drawn To Dark And Gritty

Tim Bradstreet : "Like all of Clive's stuff, you can't stop reading it; you are so fascinated by this off-the-wall oddity. And of course, P. Craig Russell makes it operatic. He takes this strange tale of this doomed kid and turns it into a thing of beauty and contemplation, which is what it really is. Craig was the perfect guy to adapt the short story. It's blood and creepy as fuck, literally."

Tim Bradstreet : "Clive Barker's Age of Desire [was] the first graphic novel I ever illustrated, way back in 1991/1992. Age of Desire marks a milestone for me; in one go I was working on a major comic project, and got to work with both Clive Barker and P.Craig Russell to boot. Unfortunately however, this was to be the last sequential work I would do for quite some time. Sadly, just as I had completed almost a year of work on the book, the publisher, Eclipse Comics, went belly-up, and all the work I had turned in up to that point vanished. Since I was in contract dispute at that time, I never got paid, and even after months of fighting to regain possession of my originals, I have only the last few pages of this forty-eight page story. Seven years later the story remains unpublished.
"This goes a little way toward explaining why I tend not to do sequential work. However, despite all the frustration and disapppointment, there is a potentially happy ending here. It seems that the lost originals have resurfaced in the possession of Clive Barker himself. Maybe some day soon Age of Desire will see the light of day after all."

Tim Bradstreet : "That was a rumour at the time, one I put too much stock into. Clive never had the pages. Eclipse went bankrupt and at the time I was about three panels from finishing the book. I hadn't been paid for about half the book. I still had about 11 pages that I had not turned in, but the rest was lost. I had no idea what Eclipse was doing in their bankruptcy situation. I called and no one would pick up the phone. I was freaking out because I'd put so much work into that thing and now 37 pages, a two-page spread and the cover were MIA. For months I tried everything in my power to get some kind of answer. Never heard a word back from Eclipse. Seven years later the pages turned up in the possession of one of the former editors, Val Jones. She boxed them up and mailed them back, minus the spread and the cover. But at least I had the pages and I was very happy about that."

Tim Bradstreet : "Eclipse was publishing Tim [Truman]'s other work and I believe it was planned at the start that Eclipse would do a collection. They were seeing my work and I was getting offers for projects from them. That all led to adapting Clive Barker's Age of Desire.
[On the transition from inker to penciler] "Well it wasn't difficult. I'd done it before on Age of Desire. Storytelling always came naturally to me. Working with guys like P. Craig Russell and Tim Truman served to give me a better understanding of the medium. When Axel Alonso asked me to pencil a story I wasn't sure that I wanted to. I was comfortable doing covers, and doing eight pages for a fourth of what I make on covers was not exactly making me jump. I got burned on Age of Desire back in '91. I did 48 pages for a graphic novel that never got published and the art ended up becoming lost until a few years ago. All that effort just pretty much wasted. I wasn't sure if I wanted to dive back in. Alonso really wanted it and found a writer that I liked and who would work with me. I read the story [Gangland] and decided to do it."

Tim Bradstreet : "I finally learned the truth about Craig Russell's plight with Age of Desire. All through the process he was nothing but extremely helpful. I called him periodically to ask him about panels and he was always 'Johnny on-the-spot.' I had no idea that Eclipse had treated him the way they did until I got hold of a great interview with Craig in The Comics Journal. In the interview Craig went into detail about how he was hired to fully ILLUSTRATE Age of Desire. All this time I was led to believe that Craig had simply been hired to do the story adaptation and provide breakdowns. Now I had learned the truth. Craig had actually finished illustrating a third of the book. More than half also existed in full pencils. But somewhere along the line Eclipse decided that the style of art Craig had chosen to employ was not something they were interested in. Craig went so far as to contact Barker, hoping that with Clive on his side he could then continue with the project the way he'd envisioned it. Sadly, Clive sided with Eclipse and Russell was left in the cold. I thought it was a dismal shame, especially after seeing some of the rejected pages that were printed in the article. They were absolutely gorgeous (And I'm so glad we can finally show some of them here). I just didn't understand why you'd hire a guy like Russell, a visionary, and then not only edit out his superior vision of the story, but then reject the style he chose to bring it to life with. To me, P. Craig Russell is like Stanley Kubrick or Terrence Malick. He's an auteur. The best way to work with talent like that is to let them go, because the results are pretty much always something special."

Age Of Desire - A Journey

P. Craig Russell : "The fire motif, from the first words 'The burning man...' followed shortly by 'Am I on fire...?' led into the three page title sequence, low simmering fires spread across a double title page followed by dying flames and the shadowed visage of an experimental monkey screaming over the dying flames. "'Fire' and 'Heart' were repeated throughout the story. Both motifs were brought together in the second and last three page sequence in which the shimmering flames of the opening pages return in a double page tsunami of flame in which a reiteration of the nihilism of unquenchable desire expressed by 'give me your heart' spirals endlessly in the flames, the aural made visual, before dying away on the final page."

Give Me Your Heart

Joe Pruett : "Yes, Age of Desire has been a long time coming and we apologize about that. It turned out that when Tim (Bradstreet) looked over the original pages that there was a lot more 'touch up' work that needed to be done than anyone imagined. Coupled with the fact that Tim is one of the most in-demand artists out there it has been extremely hard for Tim to schedule the time needed to finish up the project. I did speak with Tim the other day and he assured me that he had scheduled to work on Age very soon. We're hoping to have it out to you sometime this summer. Again, sorry for the delay. I hope you find it was worth the wait when you finally see it!"

Forum posting by Joe Pruett at www.comicrelated.com, 11 May 2008 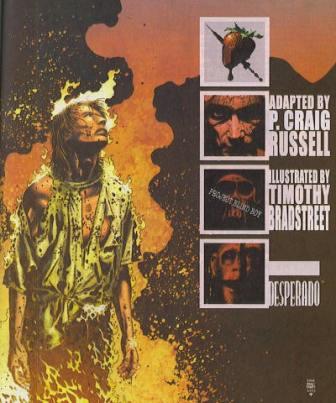