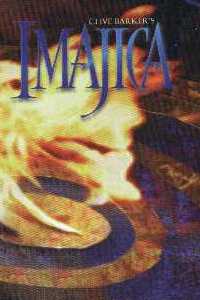 Zehrapushu Inc, founded by Sean Curran and Hans Rueffert, created this CCG based on the 5 Dominions of the Imajica - and all its inhabitants. Calling in artists of the calibre of H.R.Giger, Eric Dinyer and Ted McKeever, they meticulously created a series of nearly 350 cards in consultation with Barker. Many of the rarer cards have commanded a premium price amongst traders as have some of the cards illustrated by Barker himself, which were largely promotional (see artwork on cards).
Just when it seemed that the game was really about to take off, and an 'In Ovo' expansion had been promised, production inexplicably stopped and the game was no more...
In an exclusive for Revelations, Hans Rueffert kindly agreed to pen a new introduction and overview of the game especially for this site, included in the comments below:

"There is a game of Imajica in the works. Hans [Rueffert - co-founder of Zehrapushu] has a much better sense of what the game is actually going to be, and I would hate to describe it. These are very cool guys who understand the mythology of Imajica in the greater detail. I think they are going to turn this into a game without violating any of the spirit of the book. In fact I think they are celebrating the spirit of the book. I am awestruck by the detail and the care they are applying to the project by their love of the material. I think it's going to be a tremendous piece of work."

"In your hands is the beginning of a new Imajica journey; a game very different from that which I played writing the novel. In fact, it is in one sense a glorious undoing of my labors. For here the words have been returned to images and ideas, and the roads which I chose not to take in the book are once more available for the travelling.
"Most astonishing is the process by which chance, which is steadily ousted from a book as it approaches its final form, is once again at the heart of the adventure. In the fall of a card, the fate of Dominions may be decided."

Josh Hvizdos (for HarperPrism) : "Clive Barker has described his novel Imajica as 'My Bible'. To anyone who has read the novel, the description is accurate. Imajica deals with Great Issues and Eternal Questions. Barker weaves God, the Universe, man, woman, mind, and sex into a complex morality play.
"The story of the Imajica revolves around no one less than the Second Son of God, a man named John Furie Zacharias, but who answers to the nickname Gentle. Gentle is amnesiac, but eventually discovers his divine roots, learning that Earth is the Fifth of Five Dominions - the Imajica. With the aid of an omnisexual shapeshifting friend Pie 'oh' Pah, Gentle begins a trek through the Imajica, ultimately reaching the domain of his Father, Hapexamendios, in the First Dominion. Through his journeys, Gentle discovers the realities of God, divinity, and love.
"In Clive Barker's Imajica: the Collectible Card Game, the players represent powerful forces in the universe. The goal of the players is to establish 'spheres of influence' in each of the Five Dominions. To do this, the players recruit allies from each of the Dominions, and have them seize important locations. The first player to secure a foothold on each of the Five Dominions wins.
"The focus of the game is naturally on the character cards. The player himself represents an 'Autarch,' who cannot directly affect the universe at large. His allies on the other hand, represented by the character cards, are free to move about, and do his bidding. The primary responsibility of the characters is to secure sites within the Imajica, but they have other roles. Allies of one Autarch can ambush and kill other characters in play. Special 'ally action' cards allow characters to affect the game in other ways."

Hans Rueffert : "The whole thing started with a simple, 'we can do better than this'. My friend Sean Curran and I (life-long gamers) had invested heavily into the customizable card game craze and made it a point to try each game as new titles emerged. We liked the format and the overall concept of building one's deck around a strategy and going head to head against your opponent's best laid plans. We were playing a game one evening called 'Blood Wars', put out by the makers of Dungeons and Dragons. We spent more time bellyaching about rules discrepancies and conceptual flaws than we did actually playing the game. It wasn't just Blood Wars... all of those games were driving us crazy for different reasons. And so finally, Sean said 'we could do better than this', to which I replied, 'why don't we?'
"I'd had the opportunity to meet Clive the previous year at the Horror Con in Atlanta and had been a fan of his work for years. As soon as we stumbled upon the idea of creating a game, I knew immediately what it should be: Imajica. It was perfect! Five dominions to be reconciled, magic, warriors, creatures, religion, etc. The more we thought about it, the more it seemed that the other big CCG at the time had actually 'borrowed heavily' from Clive's work.
"So, before even talking to Clive, we set out to make a game. It was important to us that we present to him a working proposal. We asked friends and family to contribute art and created the proposal, complete with cards and rules. We wanted to make sure that we were proud of the game even if nothing ever came of it. I presented the proposal to Clive in San Diego at the Comic Con. Clive was there with Scott Bakula promoting the release of Lord of Illusions and the atmosphere was frenzied. I only had a few moments to hand him the proposal and then was quickly herded off.
"The Monday after the convention Clive phoned, much to my surprise, to say that he loved the proposal and wanted to move ahead with the idea. His only stipulation was that the art be 'fucking fantastic'.
"And so off we went, tweaking rules, developing strategies, tournament rules, and securing the fantastic art we needed for the project. We were blessed with truly enthusiastic artists who were eager to interpret Clive's vision. We were also blessed with a circle of friends and family who were willing to help us create this thing.
"Shortly after the release of the game, HarperPrism was dissolved and the planned In Ovo expansion was cancelled, thus sealing the fate of the Imajica CCG. Without an expansion, potential players would simply not invest in a game. In addition, there were little to no marketing efforts to promote the game. Even still, the game won several awards for art direction and design and to this day has fans collecting and playing."