The Visionary Art of Majo Pavlovic

A Revelatory Interview with Majo Pavlovic
By Phil and Sarah Stokes, July 2022

Majo Pavlovic has adapted and illustrated two stories by Clive, illuminating his words for a new audience in Bosnia and Herzegovina, and worldwide.
Living and working in Sarajevo, his visual work reflects the dynamic influences of his East / West home country and brings his distinctive style to bear on both collaborative and solo projects. More of his artwork can be found in his deviantArt gallery, here.
He recently gave us an insight into his work... 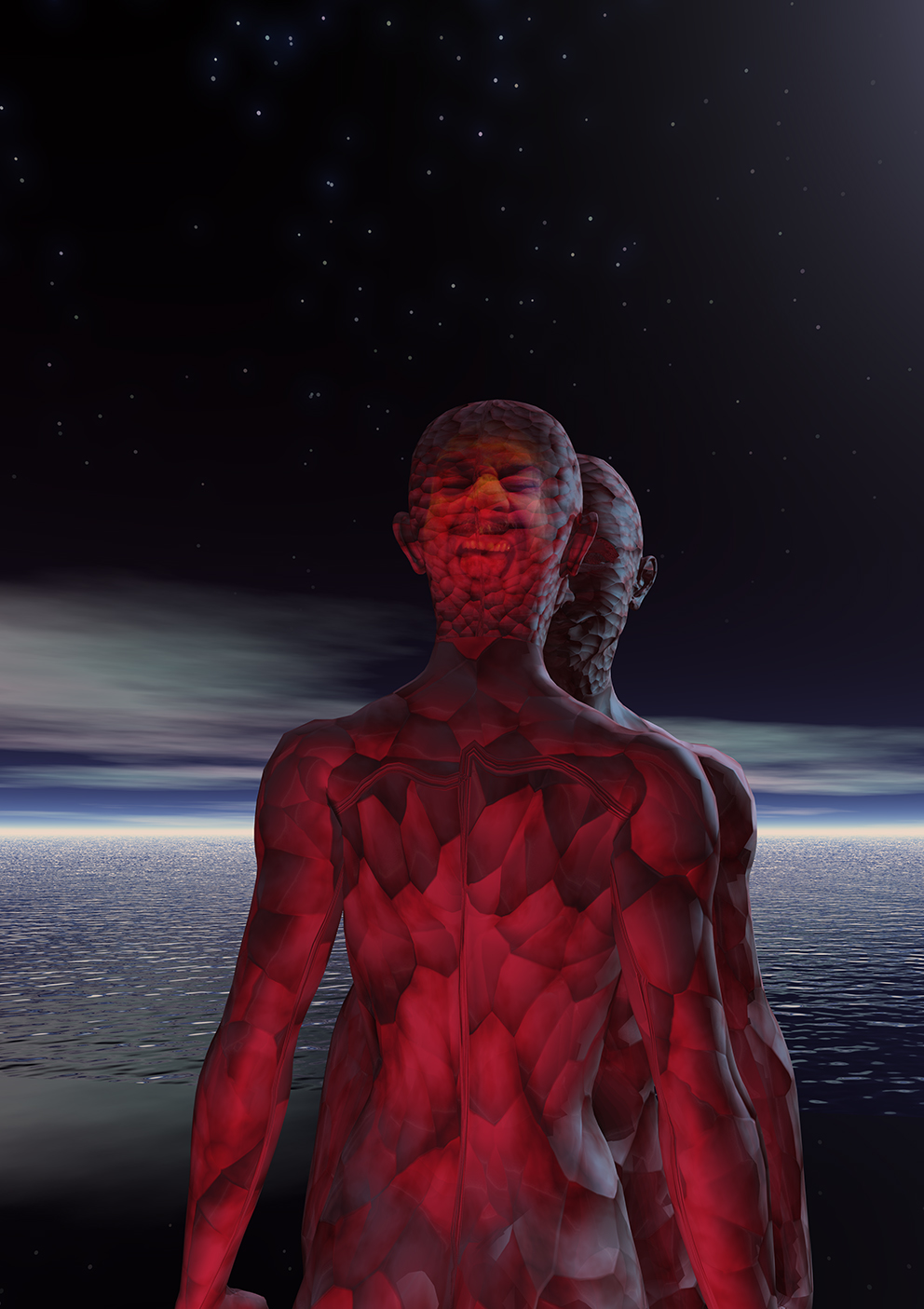 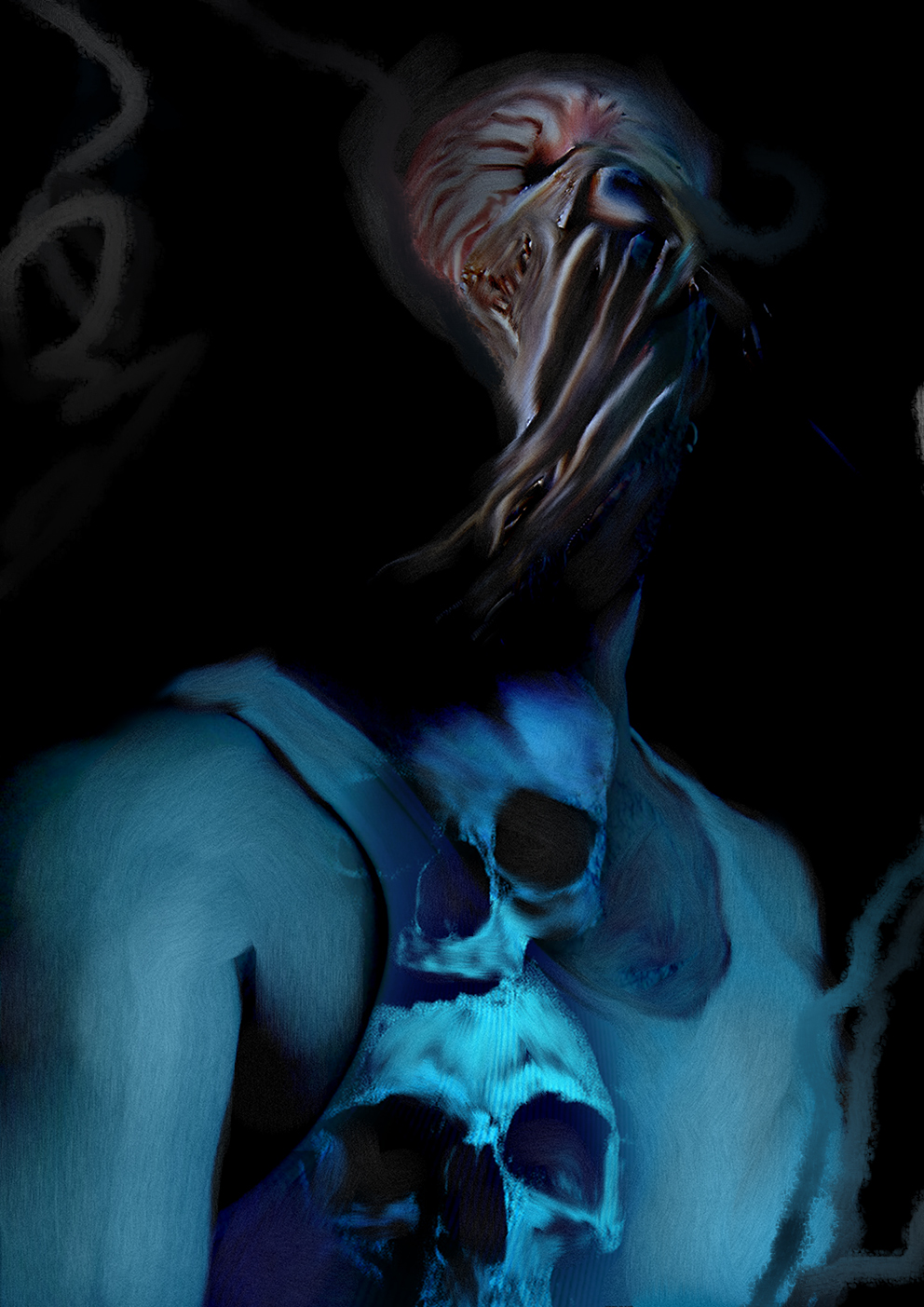 Revelations : "Perhaps we can start by asking about your background – where do you live and when did you know that art and creativity were the path that you wanted (or needed?) to pursue?"

Majo Pavlovic : "I was born and still living in a small town in the Balkans, named Sarajevo. I grew up with a father who was an artist, and I guess that I was trying to be like him – he was my main inspiration. Dad was creating magical worlds while listening to some dreamy and pretty unusual music (Tangerine Dream, Pink Floyd) and I was already five years old drawing my first comic books. You could probably name only few people in this city back then, who were listening to those bands. We’re talking about early eighties."

Revelations : "What kind of formal training have you had as an artist, or are you self-taught?"

Majo Pavlovic : "I was educated in high school for applied art and later studied at the Academy of Fine Arts here in Sarajevo. I studied graphic design and painting, as well as teaching direction." 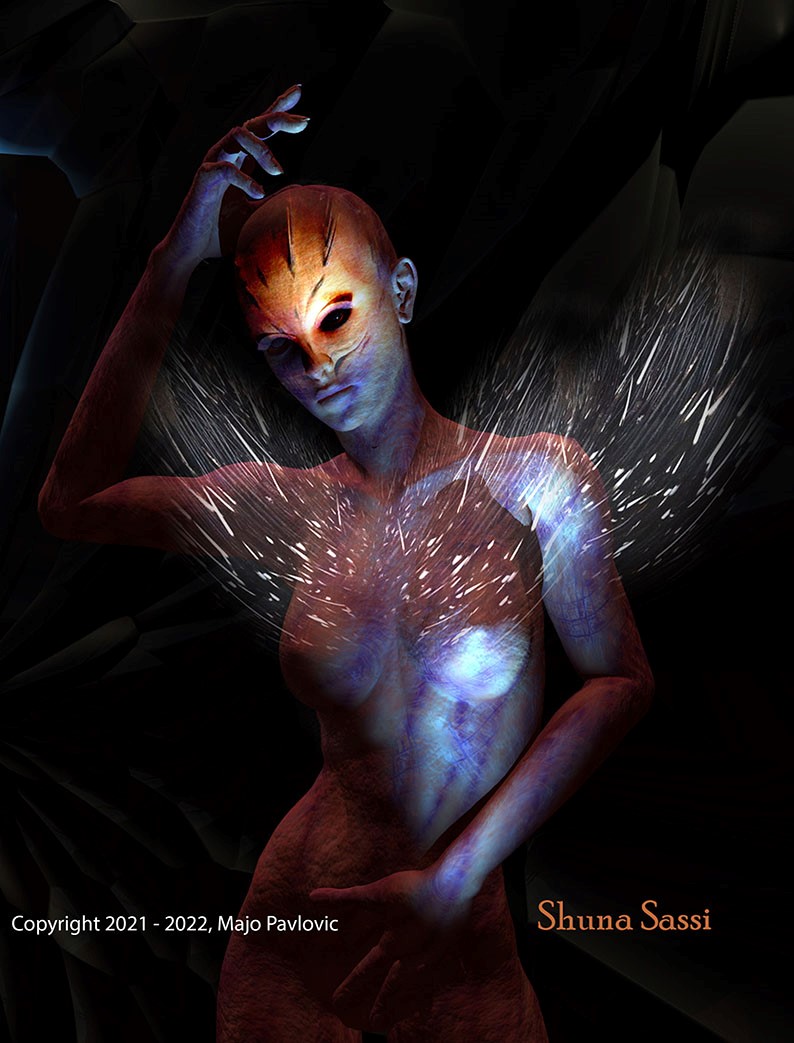 Revelations : "Do you have a favourite medium – and if it’s digital art as a preference, what methods do you employ?"

Majo Pavlovic : "My favorite media is oil painting and digital art, where I combine 3D software and Photoshop, as well as some painting software. At one point, I decided to dedicate myself more to digital illustration and comic books/graphic novels, and I have published eight projects for a domestic market."

Revelations : "You're a teacher too – how do you inspire or encourage creativity in your students?"

Majo Pavlovic : "I've been working as an art teacher in elementary school for fifteen years now, and I also run a school for comics art. Hundreds or I should say thousands of students went through these schools, and it was always inspiring to work with them. That inspiration goes both ways. There were some natural talents and those who wanted to learn about art and creative process. I always say to them that art is a way to express their emotions, to briefly escape to the world of imagination, where they can re-discover themselves. And I am working with kids from ten to fifteen years old, and some older students in the school for comics art." 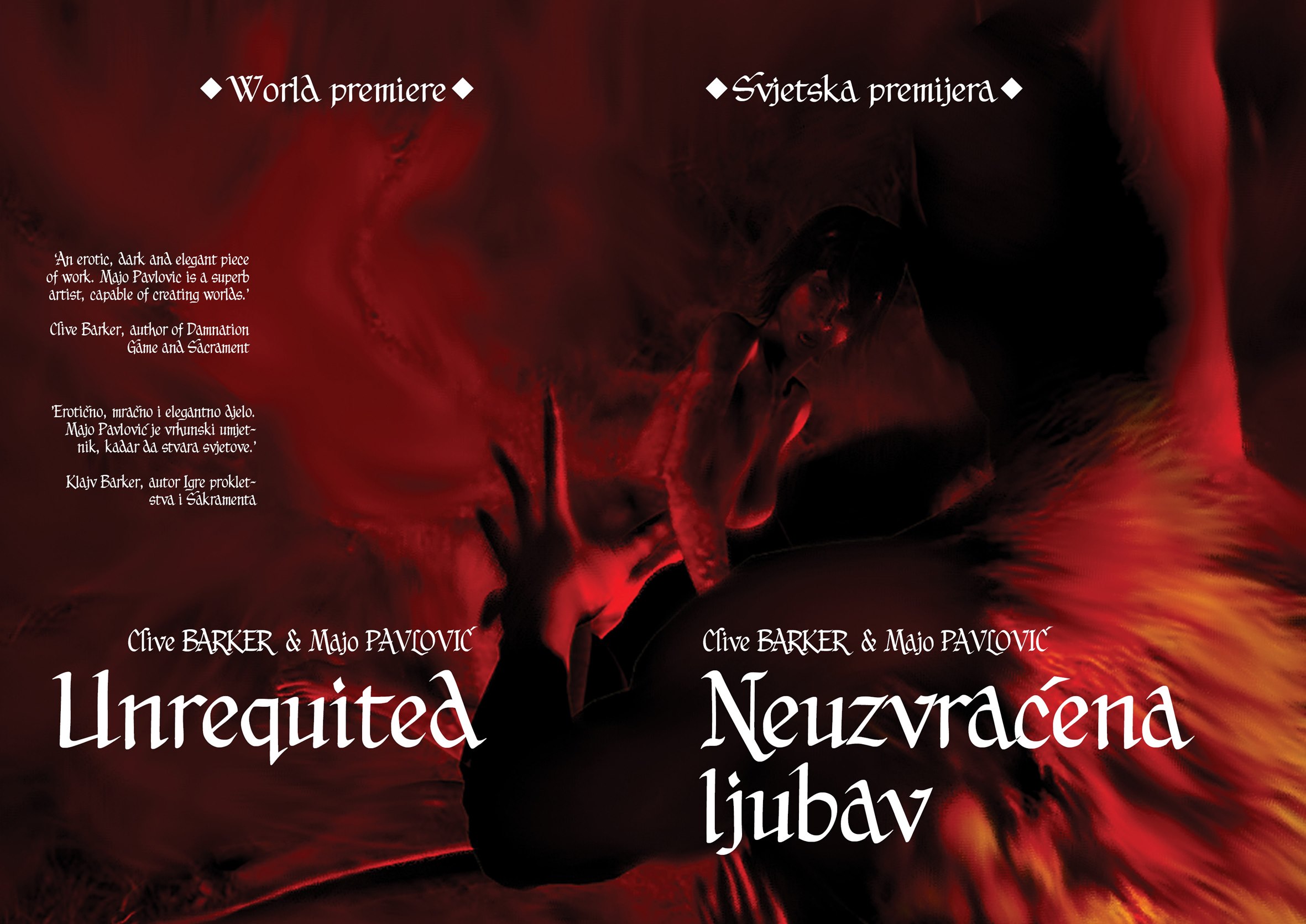 Revelations : "You’re also involved in Bosona, the art periodical – could you tell us a little more about it please?"

Majo Pavlovic : "I started writing and drawing for Bosona by ‘accident’. An acquaintance hooked me up with the editor who was interested in my art. That's when I published the first expert text on comic art history and later drew a short visual narrative titled ‘Justice’. But I wasn’t aware then that this project would have the success it has now. Bosona is actually a publication that combines theoretical texts, interviews, a comic book drawing school, essays, comic strips, with dozen international writers and artists working together on every single issue, and just to name some, I’ll mention Jimmy Stepanoff, mostly known for his work in movies ‘The NeverEnding Story’ and ‘The Name of the Rose’ and the painting and comics cycle “Die Nibelungen”. "

Revelations : "Much of your artwork features the body in fantastical, stylised poses, often brightly coloured or with reflective surfaces – how do you describe your work / style / subject matter to someone who hasn’t seen it before now?"

Majo Pavlovic : "I believe we could call it a mixture of styles and genres, which include science fiction and horror, but only superficially. It's an oneiric depiction of the world, a wakeful dream, a constant journey through the subconscious, with the accent on the bareness of man's sexuality, the beauty of human bodies that turn into beings from other dimensions where gender doesn't matter, or human encounter with demons, with angels, with aliens and ancient Gods." 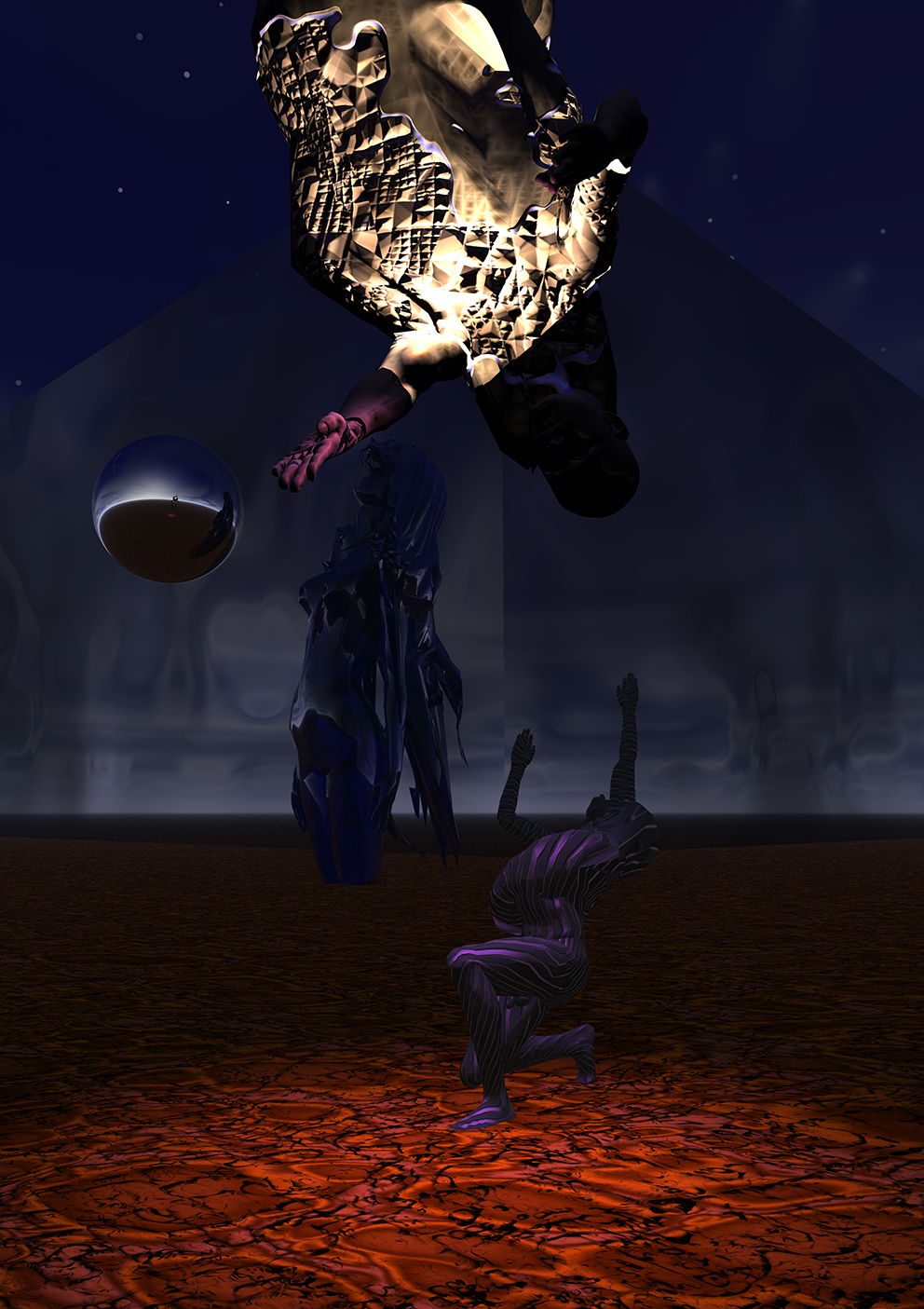 The Whisper in Your Skin

Revelations : "When did you first encounter Clive’s work?"

Majo Pavlovic : "The first time I've encountered Clive's work was way back in 1993 when I was 14. There was a war raging in Sarajevo when I met a friend, journalist and passionate comic book collector who wrote for the popular magazine 'Bosnian Days'. His name was Karim and he came to our house to arrange work on a joint project with my father. At home, he had a large collection of comic books and novels and he lent me Clive Barker's ‘Books of Blood’. Besides that, he let me read the unforgettable novel "Weaveworld." By then, I was already introduced to the works of Stephen King, E.A. Poe and Lovecraft. But this was something that completely changed my perception. When we talk about Clive’s paintings and drawings, I was starting to discover that dimension of his vast creative world much later. And that was also a revelation. I saw ‘Nightbreed’ in 1994 and ‘Hellraiser’ a year later. Karim was wounded in 1995 while trying to visit a doctor, and he died some thirteen days after falling into coma. He was only 24 and I was very sad." 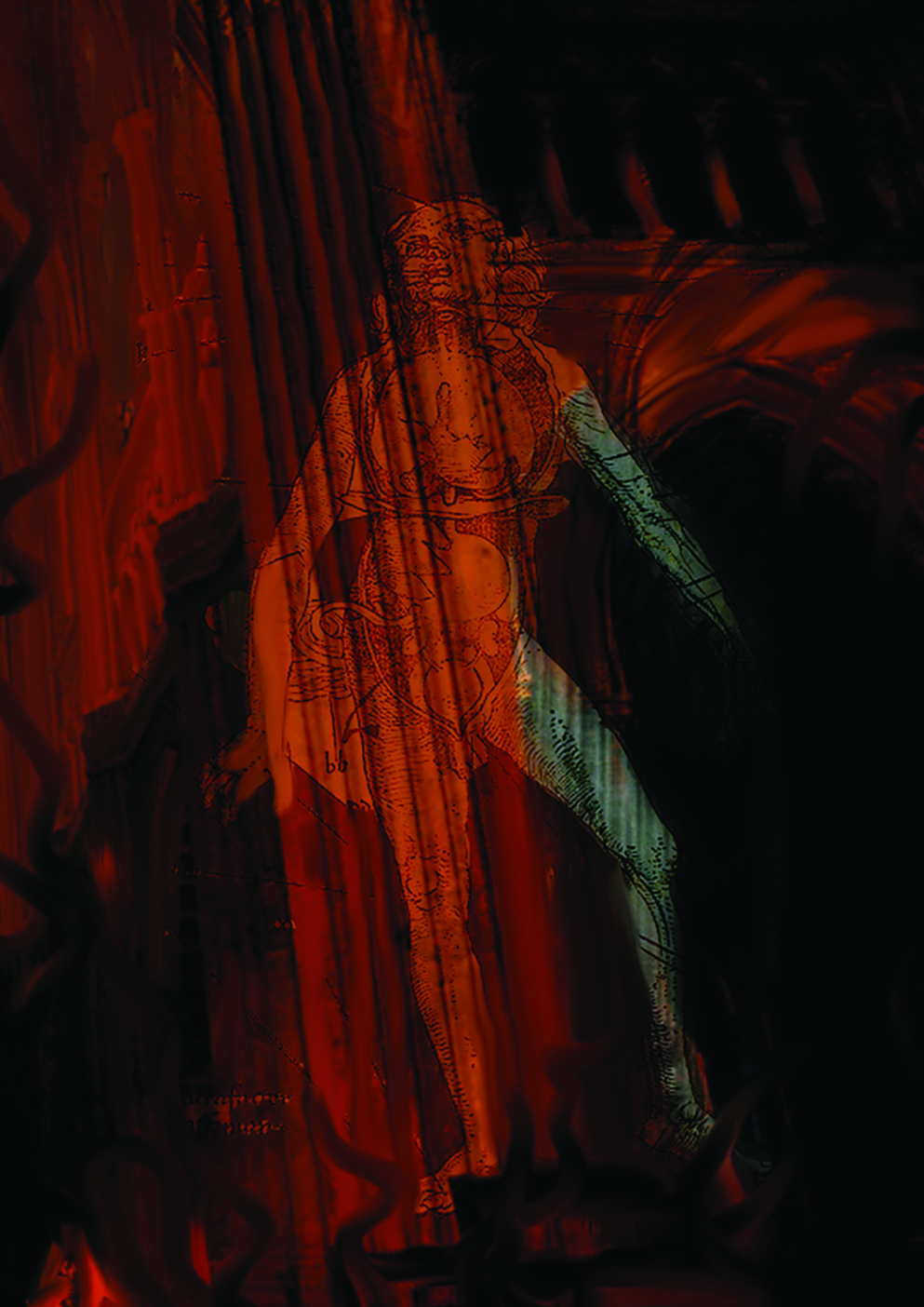 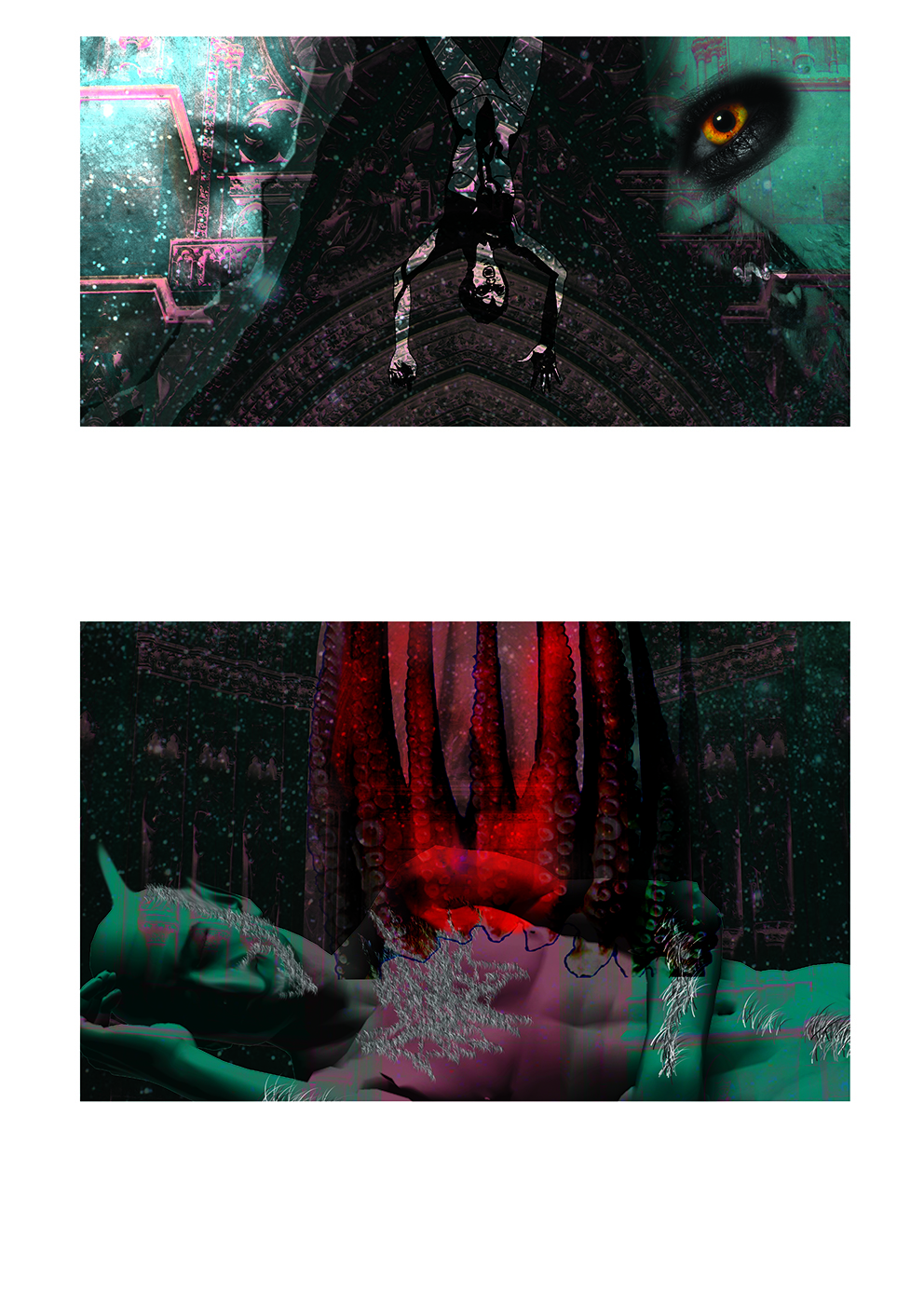 Revelations : "How have you worked with Clive over the years?"

Majo Pavlovic : "I've talked to Clive over the years about how we could best intertwine our ideas and visions. He noticed my illustrations on Facebook, sometimes during 2013 and those were actually fan art pieces where I represented his characters mainly from Abarat. We didn't know each other at the time, but he contacted me and suggested we work on a joint project. It sounded amazing to me. However, as time went by, we got to know each other better by sharing art and stories, and Clive invited me to visit him at his place in Beverly Hills where I have spent ten days, making drawings, paintings and visiting the city of L.A. Later on, my editor asked me if we could adapt one of Clive’s stories for Bosona. I was calling him and asked if I could adapt one of his short stories. Clive said that I should do ‘Down, Satan!’ He was happy to hear that we want to do this and gave us exclusive rights, together with an interview considering his involvement in the world of comics. Two years later we agreed that I should adapt another story of his, titled ‘Unrequited’ which was published in the latest issue No. 10., back in 2021. Both projects were an amazing experience for me. And a huge honor, of course." 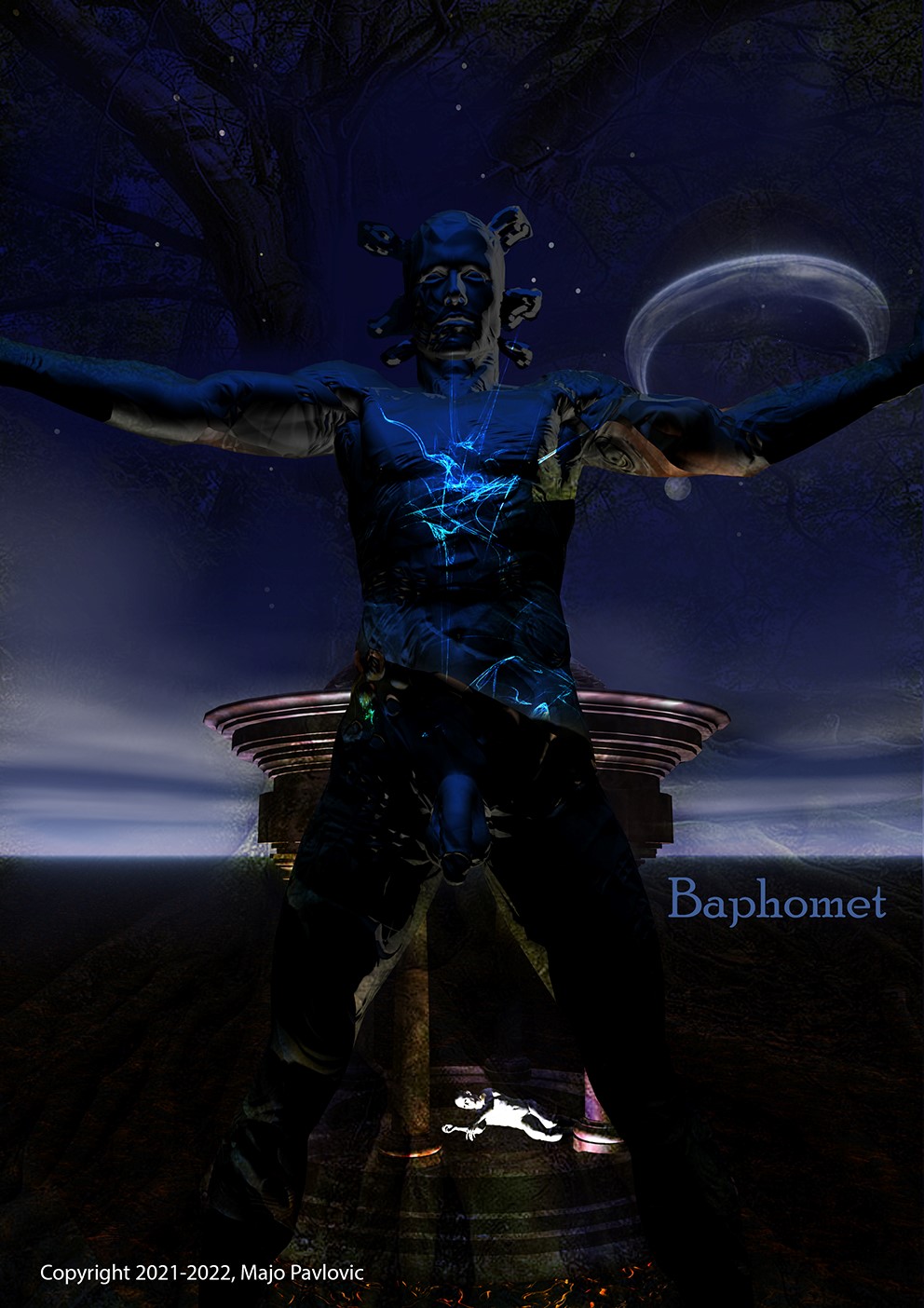 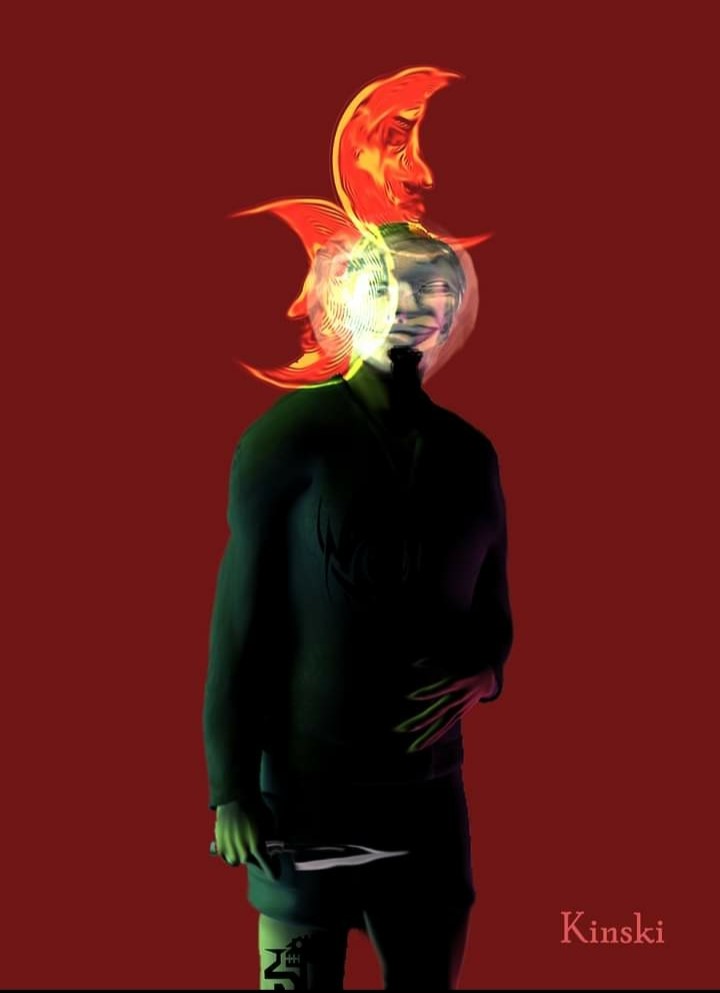 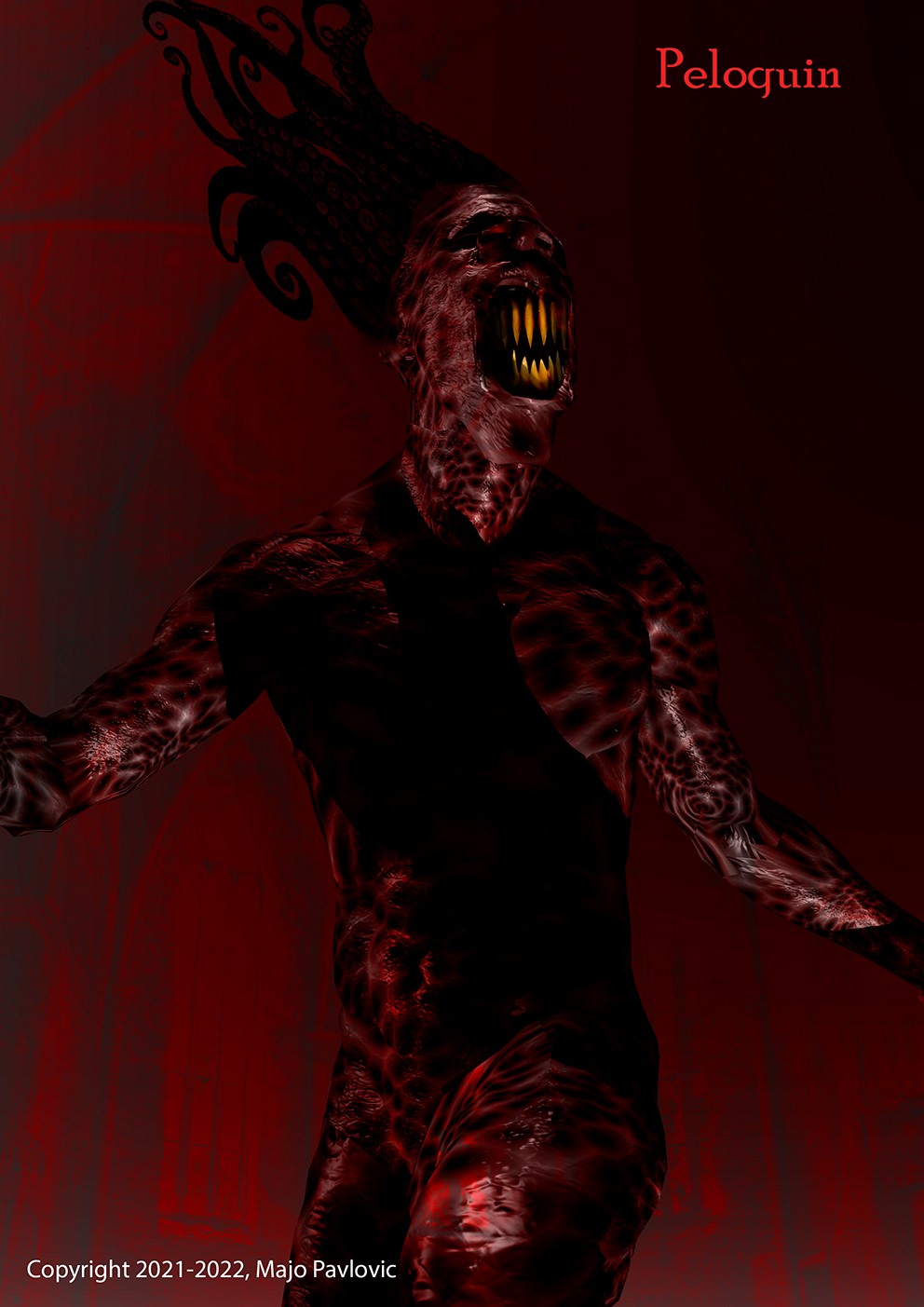 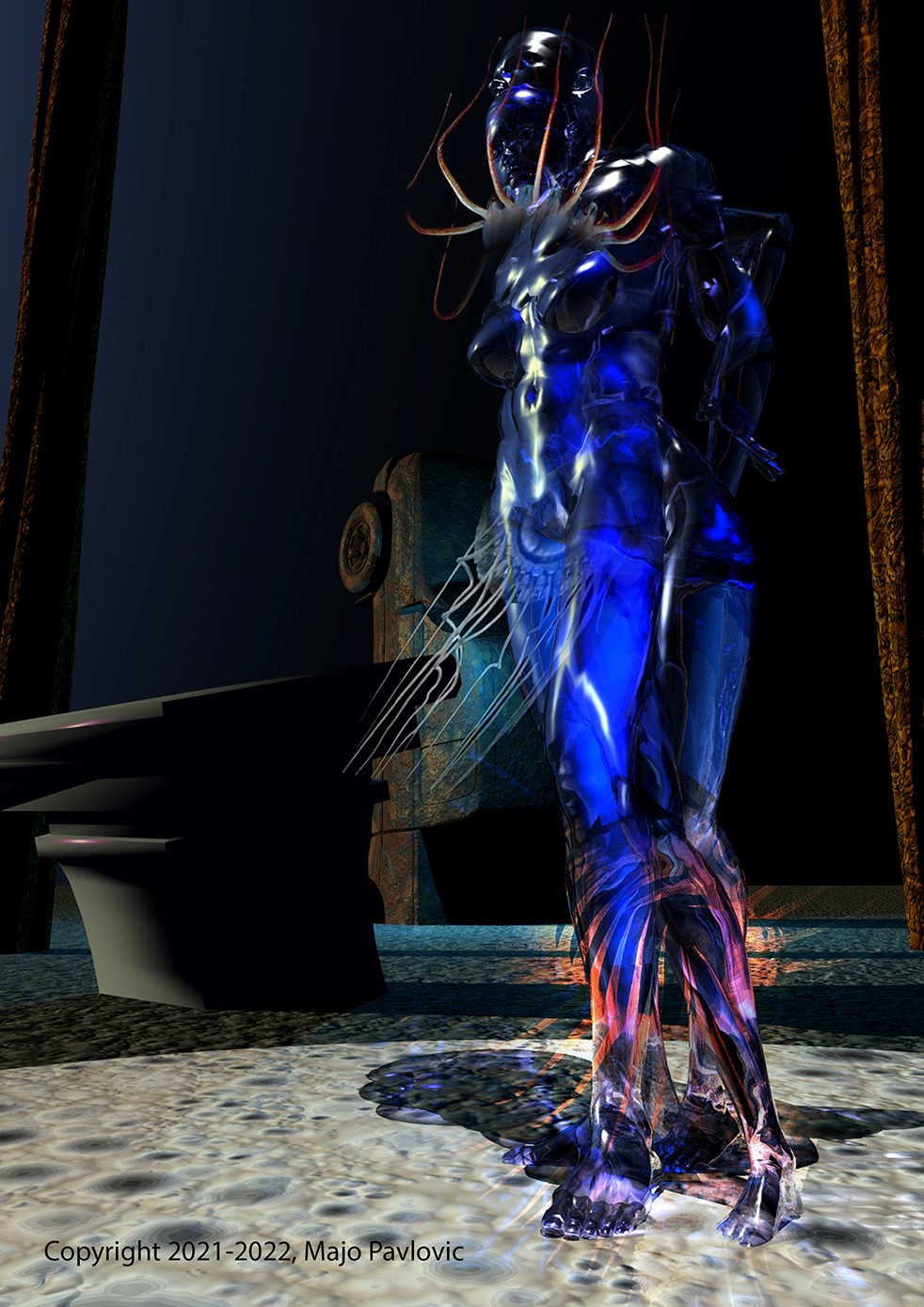 Revelations : "What are your favourite pieces of your own work that reference Clive’s work?"

Majo Pavlovic : "My favourite pieces of my own work that references Clive’s work… well that is a tough one. I should say all of them, but there are some ‘Hellraiser’ pieces such as ‘Hell Priest’, some ‘Nightbreed’ character designs, like Baphomet (he’s so powerful and I love the colors I was using on that one) and my take on ‘Down, Satan!’, because I love that story very much. I guess that I have managed to depict the dread, the tension while we’re waiting for Gregorious to finally meet the Antichrist and I also love the vision of New Hell." 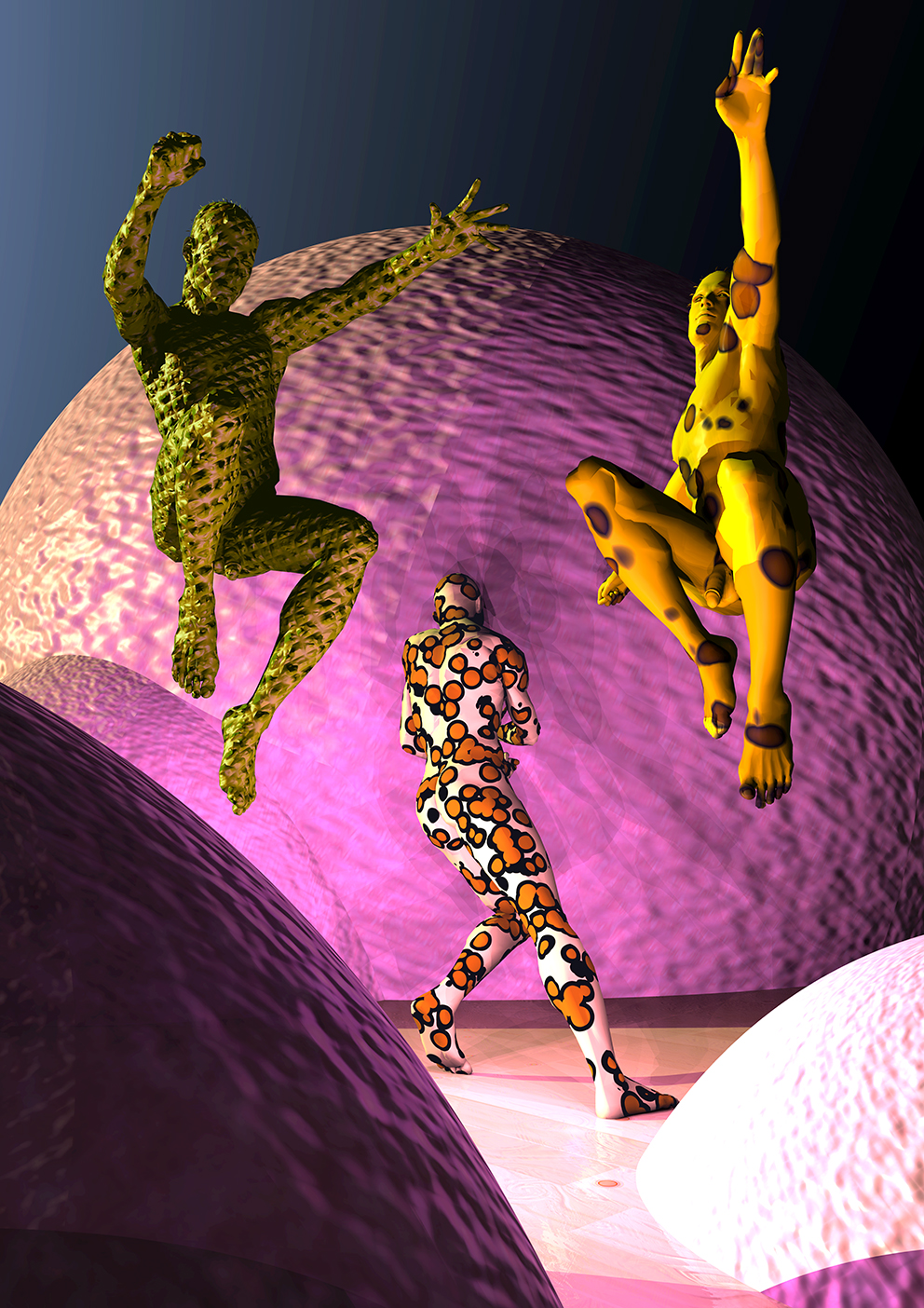 The Freaks Are Out

Revelations : "And what are your favourite pieces from your wider body of work and why?"

Majo Pavlovic : "If I think about my wider body of work, I could say that I like ‘The Freaks are Out’ because it is mysterious, dynamic and I really love the textures on those jumping guys. ‘The Worshipers1’ is also interesting to me. I like the size of that ancient God sculpture, representing both man and a woman trapped in time. I wonder if those random human explorers standing beneath this giant thing could wake it from an ancient dream. What secrets could they learn? Or shall they get devoured by the creature? "

Revelations : "What’s next for you – are there any new projects we can tell people about or point them towards?"

Majo Pavlovic : "Currently I am writing a Lovecraftian story set in Sarajevo and my good friend Amir will illustrate it. It will be published as a graphic novel, titled ‘The Whisper in Darkness’."

Revelations : "We'll certainly look forward to seeing that when it comes out! Thanks so much, Majo, for sharing both your time and your work, both collaboratively with Clive and in your own right." 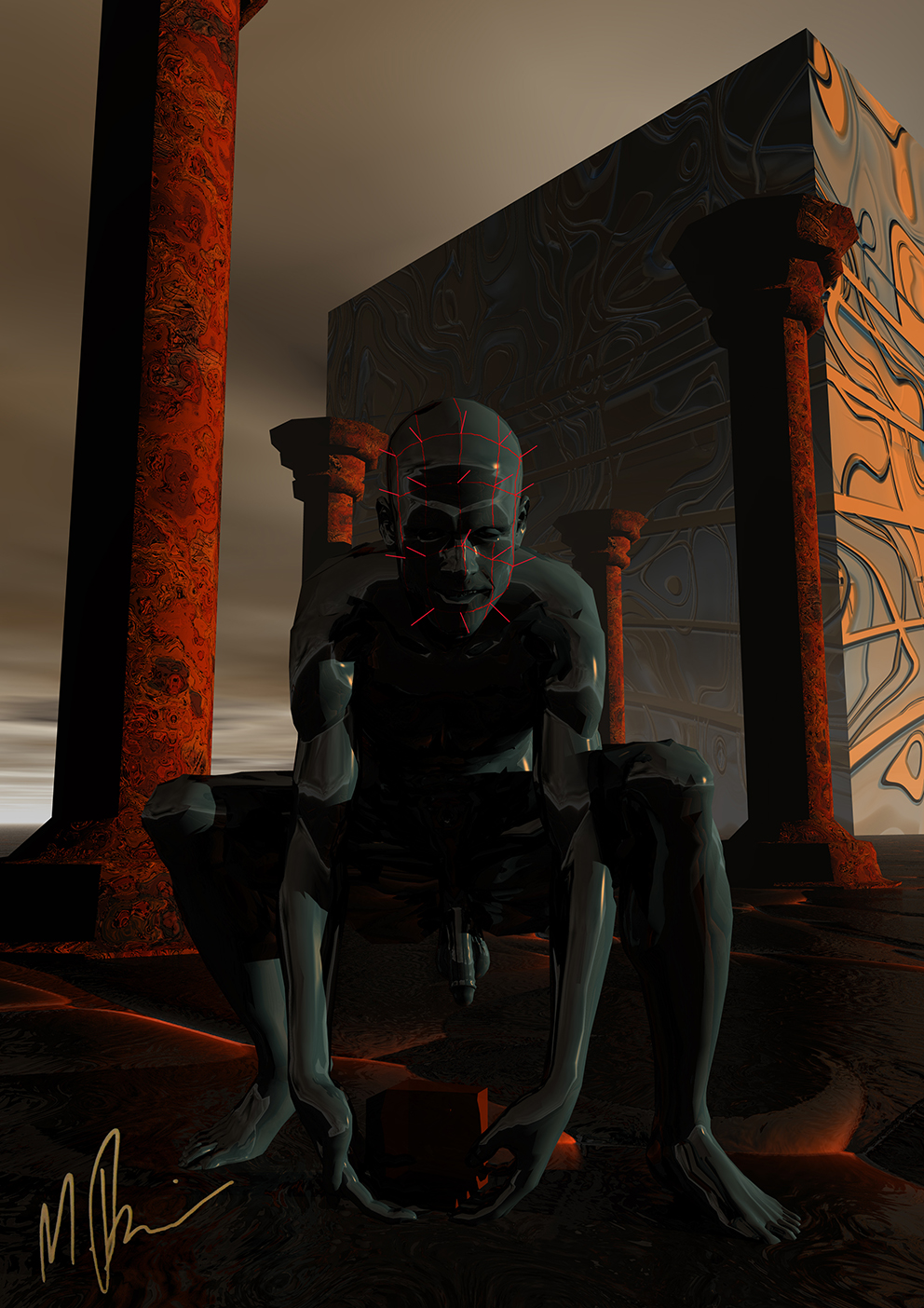 See more of Majo's work in his gallery at DeviantArt