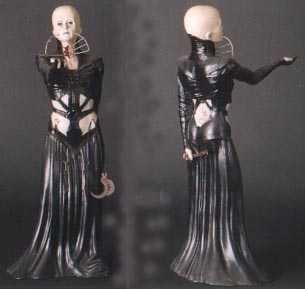 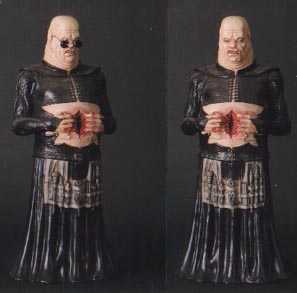 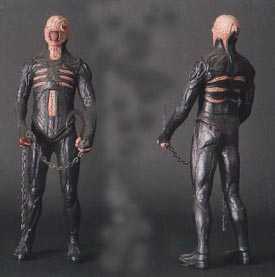 Formed by Daniel Fay and Richard Hamecher in 1987, Screamin' issued a total of eight Hellraiser kits between 1989 and 1997. The company produced Pinhead (three versions), Chatterer, Butterball, the Female Cenobite, Doctor Channard and a Lament Configuration box. The Cenobite kits were 1/4 scale with the exception of the final Pinhead which was 1/6 scale. The first Pinhead model and the Chatterer model were sculpted by Tom Kuntz, Jeff Brower took responsibility for Butterball and the Female Cenobite then followed those with the second Pinhead - the one with the Pillar of Souls - and Dr Channard...

"If people are going to buy something, let it be maximum quality stuff. We've been talking with the company that did the wonderful Freddy plastic model, and I think he's going to do a Pinhead. That Freddy they did was just great. It was a really nice piece of work. Now if somebody's going to do that kind of thing, I think it's great."

"I am delighted by the fact that Screamin' Products has put out the Hellraiser model. And Pinhead is by far their most successful model. I think Pinhead is a class act. The fact that he holds people's attention, and he doesn't do that with witticisms and doesn't attack people in showers, makes me hope that in the movies I plan to make in the future, people will find something interesting and poetic and strange in the creatures I create, and will want more than just blood-letting and naked girls in showers."

Tom Kuntz : "Originally there were a few things that were different on my sculpture [of Pinhead]. The skirt, for instance, when I did it, it didn't have any texture to it; and the reason why I didn't do that is because, looking at the stills, to me it looked like it would be smooth if you touched it. Because at the time, I really didn't care for the texturing that he put on it. But at least if you're a kit-builder, you can dry-brush it and get that 'scale-pattern' effect to it. But, it's Daniel Fay's company, and if he sees fit to alter the sculpture once it arrives in his hands, he can. I also sculpted the hands straight, not bent as they are in the finished model kit. I made it really big, 19 and a quarter inches, because it shrinks an inch in the molding process. And I sculpted a box that went with my 19 inch figure and fit in his open palms; but Danny bent the fingers up to fit around the smaller box that he includes in the kit (this is not the one I sculpted)." 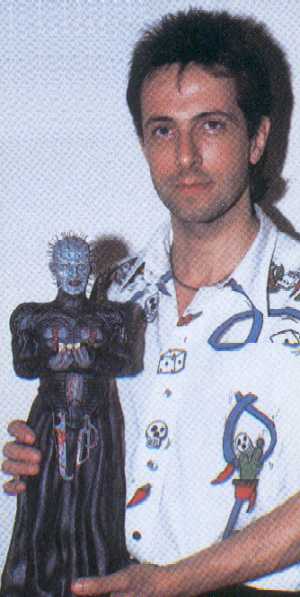 Richard Hamecher : "With eight kits from the film, I'd have to say Hellraiser is our best licence. The Cenobites are so visually interesting and so popular with fans of the films. If you see a guy with a pin stuck in his nose, you're compelled to look at him."

Doug Bradley : "It was the first time I felt myself profoundly flattered and terribly awed that the image was going to become a model because models of horror characters to me were like images from Famous Monsters of Filmland...
"One thing I've noticed walking around at shows is that people tend to paint Pinhead with a definite blue sheen which he didn't have. That blue sheen comes from all the blue lighting in the scenes... It's a kind of flesh tone, sort of pink that was dirtied up a bit with a lot of blue-grey around the eyes with red in the scars."

Tom Kuntz : "As to Chatterer, I don't really care too much for the second Chatterer in Hellbound, so I'm basing my sculpture on the first one. And again, of course, the main concern is reference. I've been on a stills-search to all the shops, Hollywood Book & Poster, everywhere; and Daniel Fay has been trying to get stuff from the movie company and Image Animation (the FX company) for me. I've gotten as much as I can, but there isn't much available of the lower portion of his body and from behind."

Nicholas Vince : "I was flattered that it was the next one in the line. It's interesting though because I only did the Chatterer Cenobite in two movies but because of all the heavy costuming and makeup I feel sort of disassociated with the character. When I look at it, it doesn't feel like me. It feels like something I'm not associated with, it's only now that I'm beginning to remember the experience more and all the attention is extremely flattering. I thought it was kind of neat that they added the sickle to the kit because I didn't use one in the movie. In the script they had descriptions of the Chatterer's cell, that was not used in the movie, it was lined with all these decapitated heads. I felt it was absolutely right that the Chatterer should have this tool. It's interesting that they made the right decision without actually knowing they made the correct decision."

Jeff Brower : "Basically it was a joint contract for the two figures, so I got all the reference materials together for the two of them. I had some fairly good pictures for Butterball. I had some pictures of the actor, Simon Bamford, in his costume without the makeup on. They were really helpful in terms of figuring out what the torture tools in his apron were.
"Daniel had decided what he wanted in terms of a pose. He said, 'I want to have them see into his belly.' Fingers in the gash, so that's pretty much what I did. I started doing the figure. I tried to put myself into the mind of the figure, get in front of the mirror and take the pose myself. When I did that, I sort of did this 'flasher' type of feeling. That's essentially what I tried to do, jut out the head a little bit, roll the shoulders down, to set sort of a vaguely obscene feel without getting to the point where they wouldn't be able to sell the product. Daniel and I talked about that. 'If you do that, it's got to be subtle.' That's kind of why he's got his belly stuck out like that."

Simon Bamford : "I wasn't aware that anything had been made. By chance I happened to walk into Forbidden Planet in London and there it was on the shelf! I was amazed that it had been done and that it would sell, especially in England where there isn't as big as a cult following as there is over here. I never got a kit but the guy from Screamin' told me today that they would definitely give me one."

Jeff Brower : "There were some pictures which were sent from Image Animation. For Butterball, it wasn't too bad. It wasn't very extensive for any of the characters, I must say. For the female, my reference was awful. They sent a number of fairly nice pictures of Barbie Wilde, who was not the one I was doing. I mean, the only pictures I had of the Female Cenobite, was the little tiny one in the beginning of The Hellraiser Chronicles, and one group shot that Steve Goodrich provided (all four of them with Clive Barker in front of them). Essentially most of the reference came from just sitting in front of the movies with the remote, and freeze-framing over and over again.
"The female is three pieces: the skirt, the torso, the upper arm. I also did the molding on the kit. We kind of went back and forth over whether or not she should be sexy. I wanted her to be sexy... Yeah, less of that 'pregnant belly' look: a sexy pose, give her some cleavage, things like that. There was something seductive about this character. So the way you see the final sculpture is a compromise. It's a little sexier than Screamin' would have liked it and a little less sexy than I would have made it. But, I'm very pleased now, maybe I was wrong. It's better this way, she looks more like a Cenobite than if I would have given her more of a figure. Other than that, I had free reign. I was the one that suggested the pose. I did the sculpture, the molds. I painted the one that's on the cover of the box. It was my suggestion as to what the cover of the box should look like."

Jeff Brower : "We were originally going to do the third Pinhead (from the third movie). It was going to be the crucifixion scene in the church, where he's laughing. It just wasn't working out. Out of context, it was hard to make him look sinister. It looked like he was having a ball, like he was singing an opera or something... We decided to make it a snarl instead of a laugh on his face. We also decided it would be better to go back to the original look of Pinhead.
"Frankly, I wish the likeness had been a bit better. I've heard it commented that Tom Kuntz' likeness was better on the first Pinhead, and I can't disagree. In terms of the rest of it, I quite like it. I think the Pose is dramatic.
"I saw the pillar of souls (in the movie) and I liked the idea that the character of Pinhead would have, something to relate to, instead of just relating to a void. With all the Cenobites I've done, I tried to do that to some extent, where the most obvious one being the female, beckoning Butterball with that sort of Flasher look to him. I wanted Pinhead to have something to relate to, so the chains coming out of the box were supposed to be stiffened and coming out straight at you. But not a whole lot of people build it that way. A lot of the time, they don't stiffen the chair. It's like that on the box, but most people don't try to imitate that."

Jeff Brower : "Most Screamin' 1/4 scale kits don't have bases. But because the tentacle is such an integral part of the look of this character, this kit is going to have a tentacle and a base... The back of one heel is going to touch the tentacle and the base, to lend it some support. Other than that he'll be raised up off the base. which is going to resemble the chamber he comes out of in the movie.
"I had very little reference for Channard. I had the films, and the pictures from the Hellraiser Chronicles. He's going to have his arms outstretched with the little tentacles coming from the palms of his hands. It's definitely the most detailed of all the Cenobite kits so far... The likeness to the actor is really not as important as the likeness to the make-up. His whole face changed in the makeup, the deformity from the wires, etc. In fact down around his nostrils, the laugh lines in a normal person goes up above the nostrils, but his follow the make-up. So you have to sculpt the make-up, not the actor. In that regard, I think it's coming out great."