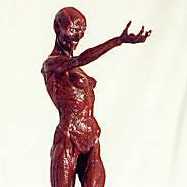 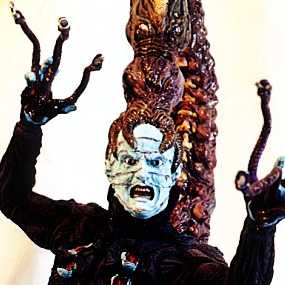 Netherworld was responsible for two Hellraiser-related models, both sculpted by Paul Komodo. The first was of Julia, the second Doctor Channard...

Paul Komodo : "[Julia] was quite a passionate thing for me. The plan was to get it out in time for the May 1994 Chiller show. I feel it's probably to date one of the best pieces I've ever done...
"I watched the film of course and once I had the impression in my head, I wanted to bring my own artistic vision into play. I also used the Color Atlas of Human Anatomy, which has beautiful photographs of real cadavers, skinned and in various stages of dissection. I had a feast doing the corpse at her feet."

Paul Komodo : "The next thing was the Channard kit, which brings us up to date... My main concern was the design of the costume itself. I have this thing in me where I like to reinvent things. There were a lot of elements to that character that I thought could be augmented. In terms of producing it as a sculpture, I wanted to focus on certain elements, like the redesign of the costume. I think that we've kept to the spirit of the thing. I wanted to give it a bit more dynamic vitality. There are some pretty wonderfully vile things going on."

Jeff Brower (Sculptor of Screamin's Dr Channard) : "It's a beautiful sculpture. I loved the base; ours is not going to be anywhere near that elaborate. I think it's very dramatic, but Paul doesn't have to conform to some of the same standards I have to. Ours is a licensed kit and has to go through an approval process as well as the fact that ours is a vinyl kit and has certain production factors to content with. I think they're going to be very different things. I hope that anyone who has the Netherworld one will be wanting ours as well. I believe Screamin' and Netherworld are on two very different scales. I think the challenge to sculpting Cenobites is that as cool as they are in the movies, that they really don't do very much compared to a superhero character or an action character. The Cenobites are subdued, so it's hard to come up with dynamic poses." 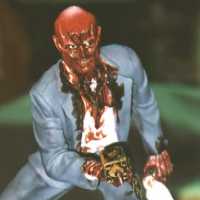 ...Skinless Frank was the creation of sculptor Mark Van Tine...

Mark Van Tine : "I had to get the rough likeness of him, but I didn't go for a photographic likeness from the movie because I wanted it to look more real. Like he might really have looked. I went with more the way the muscles should look on the face. It wasn't too bad of a movie but there were some places where it looked like they made things up, which is nice for film. But when people start examining it, they say, wait, this is wrong. So I tried to keep it a little more realistic. I thought maybe it would be more interesting in the long run to people. I think the pose on it was much more dynamic than any of the scenes in the movie." 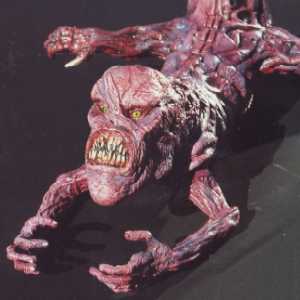 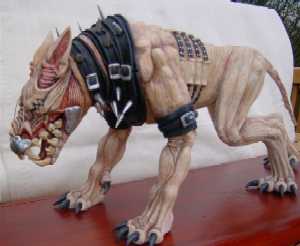 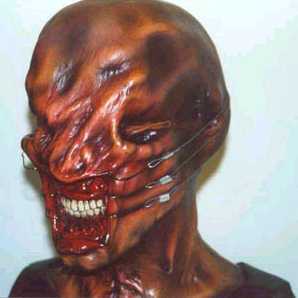 The Wall-Walker (a rendering of The Engineer) was sculpted by Jason Brookes, Guy Conrad and Ed Martinez in almost four pounds of solid resin. An archway base was also available...
The Chatterer Beast, the friendly little mutt that calls Pinhead master, has been rendered in shocking detail by Jason Brookes and Ed Martinez - it's 16 inches long and made from solid resin. This one was painted by Darren Kefford.
The Chatterer bust is a hollow resin copy cast from the original latex foam filled head used in the movie - the latex was signed by Bob Keen, Geoff Portass and Nicholas Vince and the signatures even came out in the mould!
These models are all available from Ed Martinez - contact him at
edwardamartinez@sbcglobal.net or at 1405 B Street, Hayward, CA 94541 (Ph (510) 886-6470) for more details, as well as for back issues of his Coenobium magazine and a whole heap of other stuff... 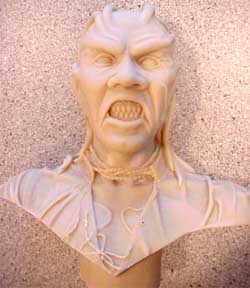 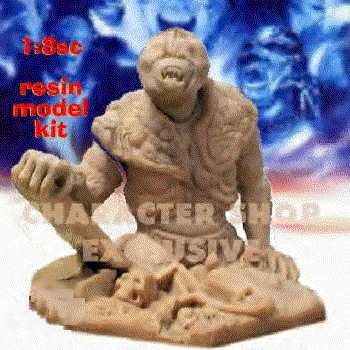 Sculpted by Wayne Hansen, Character Shop started with a bust of Peloquin which they then followed up with a full 1:8 scale model of a Beserker... 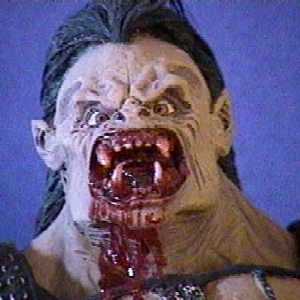 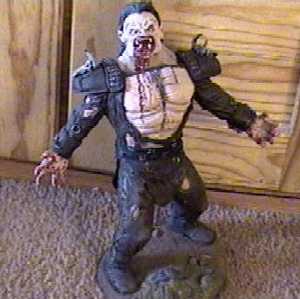 Wow! Sculpted by Shawn Nagle, the resin Rex is scarier than the movie, for sure...